Have you considered buying a fine pen? A few of the pens we found below may be considered an “expensive pen”, but we think choosing the right writing instrument can be worth every dollar.

A look back over over last few thousand years, it’s pretty fascinating to see the human race learn to write with increasing skill and usage.  In his book “A History of Writing”, Steven Roger Fischer suggests the reed pen might well have been used for writing on parchment as long ago as the First Dynasty or about 3000 BC.

The fact is, unless you happen to have literary pretensions or one of the few remaining jobs that actually require you to write by hand, if you’re like most people the only time you write throughout the course of a day is to give a signature. Such as a contract, receipt, or perhaps a birthday card- and even that’s being replaced by a quick “Happy Birthday!” Facebook post.

So why would someone need to have a really nice pen? And I’m talking about a really nice pen. Not only am I going to tell you why investing in a pen is important, but also how you can see a really nice return on it! And since most people don’t exactly shop for a luxury pen everyday, we’ve searched the web to find the best that’s out there, so you don’t have to.

Why it’s important to have a really nice pen.

1.  Your pen, like every other accessory says something about you.

First impressions are important. Countless studies have shown how quickly potential clients form an opinion. Resources like “The Psychology Of First Impressions” by marketing and branding strategist Frank Schab talk about many of the critical factors like how much eye contact and what kind kind of shoes you wear contribute to a First Impression.

But First Impressions are not the only impressions. They are just that- the first.  And because there’s a first there’s naturally…… a second. And since those first impressions are so critical, they are given the most attention. I’ve seen situations where so much attention is given to nailing the first impression that once the initial meeting was complete, there was virtually no plan for everything after that.  And so I think sometimes it’s easy to forget that first impressions can be improved upon. And that’s where the little details matter. Details like how fast you talk, pictures in your office,  fingernails, and yes even the kind of pen you use make a difference. Now is having a luxury pen going to win you new business? Of course not. But it’s a piece of a collective impression.

For example, imagine a banker opens an account for two new clients. Upon signing, the first client whips out a common Pilot G2 pen and signs the required documents. The second reaches in his shirt pocket and retrieves a sterling silver Montblanc luxury fountain pen. It’s not some huge wow factor, but it does leave an impression. Just like the right shoes, a pocket square, or a piece of jewelry. Now replay this scenario paying for a dinner, buying a car, or signing an agreement, and you can begin to see how opportunities to leave a lasting impression are being passed up because you are using the wrong pen. To sum it up, Cheryl Lu-Lien Tan wrote it best in the Wall Street Journal,

“In an age dominated by tech gadgets such as cellphones, a pen can still make a potent statement.”

The proof is in the pudding. You can tell a difference when looking at something written with a cheap pen versus a more sophisticated pen. Those who do everything with a spirit of excellence, realize that excellence is in the details.

3.  A fine pen inspires you to write better and deeper.

It’s kinda like driving a luxury car. Being behind the wheel of an exquisite Ferrari or Rolls-Royce infuses something inside of you that makes you want to do better. You can almost see the confidence pumping into your veins  driving such an exotic piece of machinery.

Ok, so maybe its not quite the same but there’s something about the weight of a truly outstanding pen in your hand and a piece of stationary in front of you that makes you want to dig deeper into what you write.

Leave your mark – literally, in style.

4.  It’s a great legacy piece to pass to the next generation.

Remember how I just talked about the dramatic decline of handwriting, and how it’s only going to continue to be replaced by technology? Imagine how little if any, future generations will actually write via pen. Which makes a luxury pen a very attractive legacy piece to pass down to future generations.

Fine pens stand the test of time. You can’t put a price tag on knowing that your children and their children may one day use the very pen you used, to write the important communications of their time.

Here are some of the best fine pens out right now. 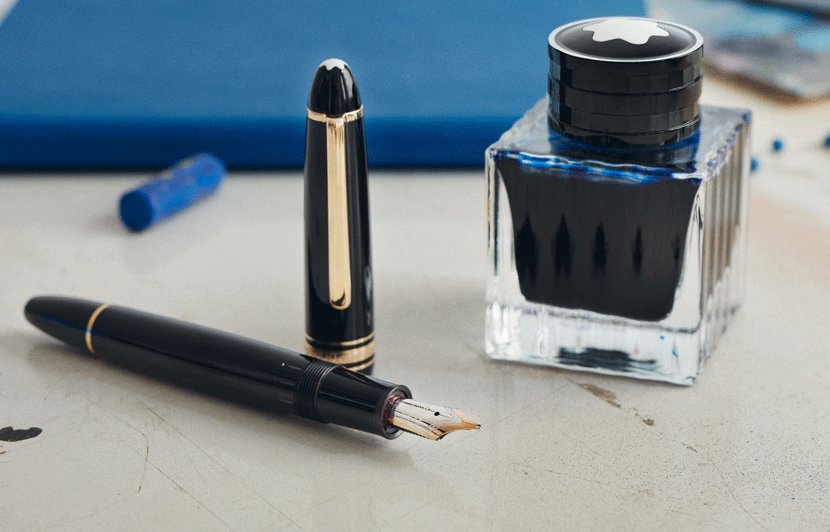 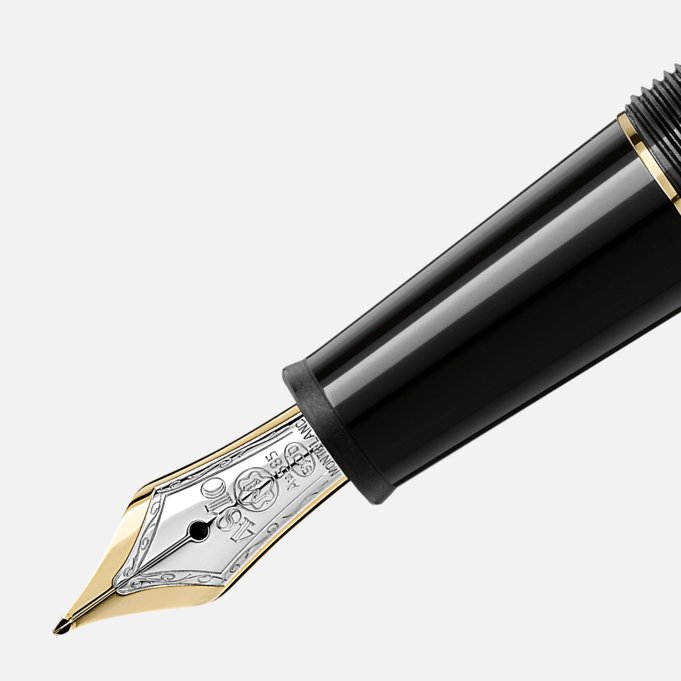 The Meisterstück Gold-Coated Classique Fountain Pen evolves into Montblanc’s design icon. Cap and barrel are crafted in black precious resin inlaid with a white Montblanc emblem. Three gold-coated rings with embossed Montblanc lettering and a gold-coated clip with individual serial number emphasize the timeless design of the Meisterstück Classique Fountain Pen. This gold-coated fountain pen is designed with a piston converter, allowing for optional use of ink cartridges, and a handcrafted 14-carat gold nib with rhodium-coated inlay. To express your personality, Montblanc offers a gratuitous engraving of names or initials.

1. Make the purchase of buying this fine pen an experience. Buy the pen and a rare book. Then you can enjoy a few days reading the book and a lifetime writing with your iconic pen.

2. Buy the pen and the book to give to an important relationship such a top executive, valued client, or a close friend. Be sure to write a message in the book using the pen.

3. Read the book then use the underlying message of persistence and a spirit of excellence in an important conference or meeting as you give the pen to a top sales producer or key employee.

Having survived for more than 100 years, Montblanc is as much a status symbol today as it was a century ago. And for just reasons. Since its beginning the German company has been making the highest quality pens in the world.

This stylish Montblanc luxury pen is part of their famous Meisterstuck (the German term for masterpiece) collection. Appealing to those customers who have an eye for fine craftmanship, it features a hand crafted 18k gold nib with rhodium coated finish and a white lacquered cap and barrel that are complimented perfectly by a silver trim.

Note: This pen was listed on Montblanc’s website for $1,150 in January 2021. So, great price on this masterpiece.

Yard-O-Leds employs a tight-knit of artisans with over a century of cumulative experience in the art of making pens and pencils to produce its wares – all of which is done entirely by hand using machinery which dates back to the nineteenth century. Like these machines, Yard-O-Led’s products are built to last – and, also like these machines they are totally unique due to the handmade nature of each piece. Hours of painstaking labor goes into the elaborate engraving on each case, and each pen bears the signature handiwork of the craftsman who completed it. Owning a luxury pen from Yard-O-Led is a marking of a man of style and an attention to detail.

Perfectly balanced with a beautiful sense of heft, this represents the ultimate fine pen for a discerning connoisseur. 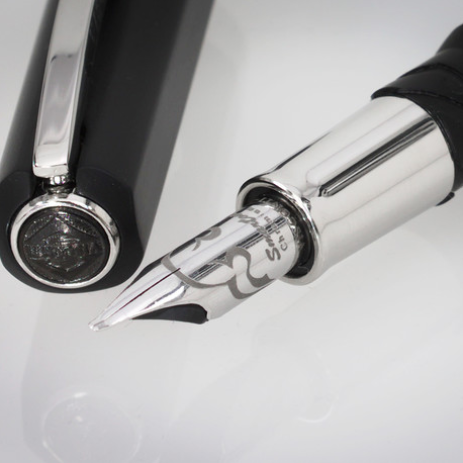 Utilizing their iconic “Squaring the Circle” design, Visconti has developed an innovative collection of writing instruments with a modern edge. Patented in 2004, the squaring the circle design was inspired by Leonardo Da Vinci’s Vitruvian Man. This combined shape is the perfect ergonomic shape for the writing instrument. The Visconti Opera Metal writing instruments are made of anodized colored avional, which is a high strength aluminum alloy often used in aeronautics.

This is a fancy pen built to stand the test of time. Note: Originally $1,095. 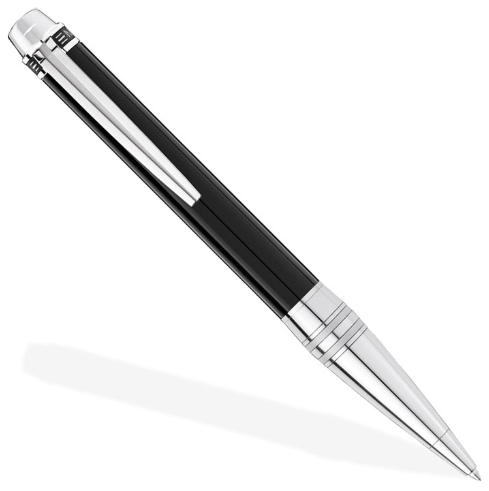 While most of Montblanc pens are priced from hundreds to thousands of dollars, those who own them appreciate their beauty and their easy writing capabilities.

Capturing the spirit of fast-paced, dynamic life in the big city, the StarWalker Urban Spirit Ballpoint expresses contemporary style with a modern shape and functional elegance. The satin black profile is carefully combined with glistening platinum plated accents to bring out an elegant sheen that pops out from across the room. Even more, the platinum coated clip bears the Montblanc name and an individual serial number. If you’re looking for a fancy pen, luxury pen, fine pen… whatever you want to call it –  without paying thousands of dollars, this is it.

Take this beautiful black and gold luxury pen from the highly esteemed S.T. Dupont who has been commissioned to craft official gifts for Indian Maharajas, British Royal Weddings (including Her Majesty the Queen), Audrey Hepburn, Andy Warhol, and even James Bond.

Imagine bringing ideas and inspirations to life with this pen in your hand.

Graf von Faber-Castell have created a range of beauiful writing instruments in several variants. This particular piece has been crafted from Makassar wood (usually used for musical instruments) with platinum-plated trims and a supple articulated clip. The natural variations in grain and colouring mean that every wiritng implement made from them is unique.

As with each product in the Classic range, this ballpoint pen comes presented in a wooden box – simple luxury.

Known for their ultra-high end luxury pens, in 2018 Visconti introduced several lower priced fine pens. How can you not love the resin on this pen?! Previously, to get pens in similar patterns you would have to shell out for a Visconti Van Gogh or a Visconti Rembrandt.

This pen embodies the luxury and unparalleled craftsmanship unique to the Visconti brand. 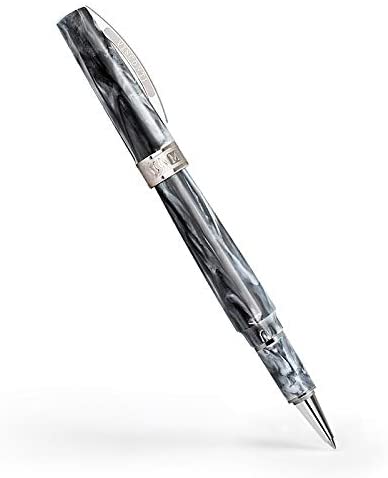 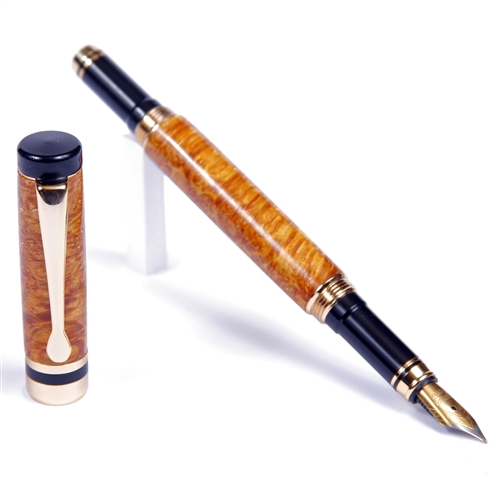 The permanent gloss finish with a removable cap that screws on both front and back ends, makes this one of the best fine pens you can buy for around $100.

Lanier Pens have grown almost entirely by word of mouth. And for good reason.

The A.T. Cross Company is America’s oldest manufacturer of writing instruments with a history that extends back for almost 170 years. Founded during a pen evolution where people where starting to move away from quill pens to more durable pens, A.T. Cross’ contribution was the first stylographic pen which is considered a technological ancestor to the ballpoint pen.

Due to the fact that Cross is still considered one of the top pen brands, this makes them a great place to start if your buying your first fine pen or if your looking to add to a collection.