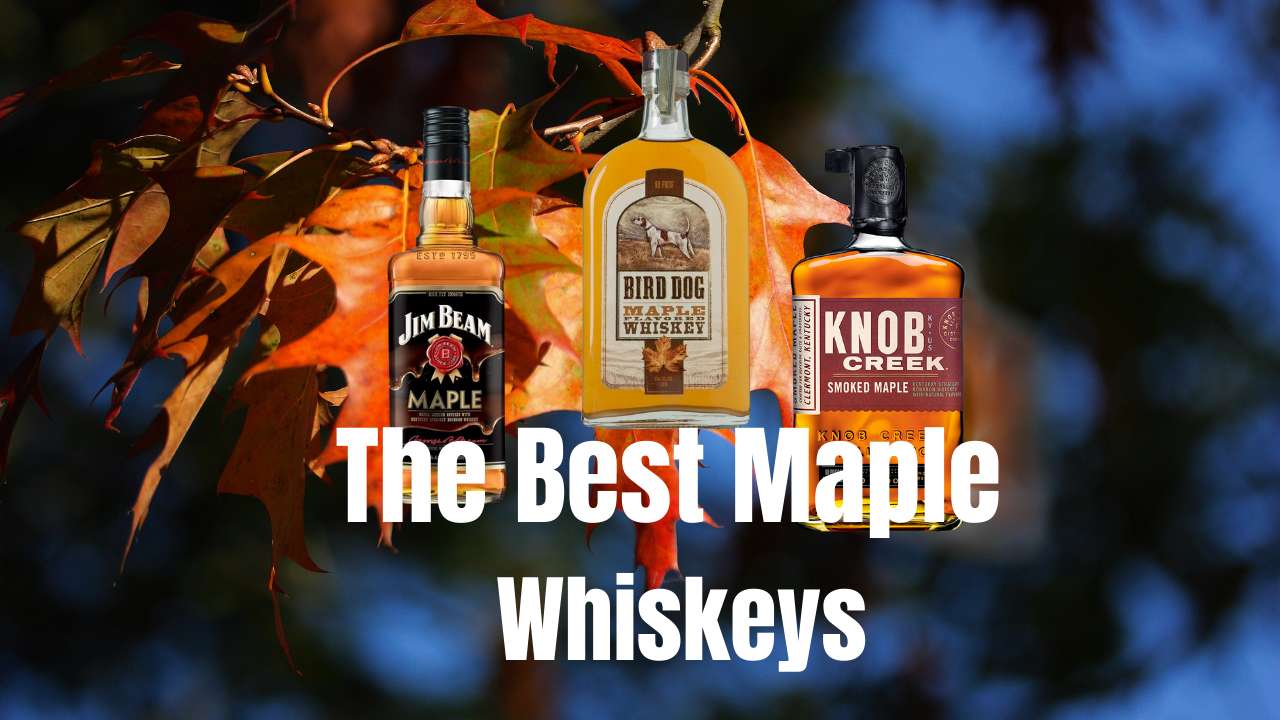 The best maple whiskey is bold in its approach. Take two of the most beloved flavor profiles on the planet, smash them together, and see what happens.

Maple and whiskey are universal truths, and there was no way this marriage was ever going to fail.

Maple whiskey can be broken down into two main groups- American bourbon-based maple whiskies, or maple liqueurs made with Canadian rye whiskey. Canada produces 80% of the world’s pure maple syrup – with 90% of that coming from Quebec specifically- so it’s no surprise that maple whiskeys are more common and established there than in America.

The American approach focuses on being a premium bourbon first and foremost and then accentuating that taste with sweet maple flavors. Canadian brands on the other hand focus more on building the flavor profile around a high-quality syrup. There is less attention paid to traditional whiskey notes like oak or smokiness and more emphasis on letting the maple speak for itself.

Because of this, the American-produced maple whiskeys tend to come in at around 40% ABV – like a traditional whiskey – while their Canadian counterparts lean more towards smooth and easy-drinking at 30% ABV.

It all comes down to personal preference and whether you are looking for something from the home of maple or the home of bourbon. As maple whiskey has grown in popularity there are now enough options available for you to decide whether maple is going to be a helping hand or the main event.

Bird Dog Maple might be the campfire whiskey. First and foremost it’s a bold Kentucky bourbon made from corn, rye, and malted barley. It has the classic burn you’d look for in a stiff whiskey, but paired with rich molasses, brown sugar, and butterscotch notes.

It basically tastes like a charred marshmallow bourbon with a maple finish. Subtly sweet with a warm, smooth finish.

The thick glass bottle feels like it has arrived from another century, and contains a premium quality bourbon with an unpretentious maple finish.

This is perfect beneath the stars with s’mores and pals. It also goes great in coffee for a winter warmer.

Best for: adventurers. Just sling a bottle in your rucksack and bring the good times.

The sweetness is still subtle and is not what drives the drink, and it’s probably the whiskey that leans most towards a traditional bourbon on this cheat sheet.

It sets itself apart from other maple whiskeys by packing a hefty punch at 45% ABV. Knob Creek’s charred oak barrels lend notes of wood and smoke as the initial maple sweetness fades, giving you the best of both worlds.

That said, it’s still smooth and perfectly easy to drink.

It’s best served chilled or over ice and honestly smells like somebody just made breakfast.

Best for: getting together with friends and family. Crack a bottle on the porch after dark and settle in for a premium bourbon with a twist.

Tap 357 is one of the newer Canadian maple whiskeys, but its popularity is not difficult to understand once you taste it. This whiskey converts people.

Unlike many Canadian maple liqueurs, Tap 357 is aged in American White Oak and holds on to those notes of charring, leather and smoke. Certainly enough to appease those who view flavored whiskey as more of a novelty and have struggled with overwhelming sweetness in the past.

It is a blend of whiskey aged from 3, 5, and 7 years respectively- which is where the unusual name comes from. The grade 1 Quebec maple is noticeable but light, helping the rye along rather than overpowering it.

Tap 357 also offers a couple of variations on their core product, producing maple rye with sherry and port finishes for those looking for something a little fruitier.

Best for: Drinking with traditionalists. This will be the one that gets them on the wagon.

The oak barrels used in producing Jim Beam lend this bottle an oakiness that reminds you that you’re drinking a Kentucky bourbon.

The flavor profile has a light bite of minerality while still being smooth and drinkable at 35% ABV. The maple flavor is fairly sweet (leaning towards butterscotch) and combines with cinnamon and vanilla notes to produce a well-balanced overall flavor.

Unlike the other whiskeys on this list, Jim Beam Maple appears quite clear, similar to white wine. This is because they haven’t added the caramel colorings that give most bourbons their deep amber appearance. Texture-wise it is relatively thick, like Sortilege (see below).

Best for: casual drinking after work. Jim Beam represents great value for money and is based on the classic Kentucky blend we know and love.

Crown Royal smells like Canada. It is incredibly smooth and you’ll have no problem drinking it straight. It’s not aggressively sweet, emphasizing the maple notes rather than overloading you with sugar.

And at 40% ABV, it still packs the punch that several Canadian maple liqueurs are lacking.

The notes of caramel and vanilla give it the sense of a very drinkable decadent dessert-like you’re drinking liquor pancakes. Yum.

Best for: the maple purist. A+ Quebec maple is front and center here and sets the bar with its subtle yet rewarding palate.

Time for something a little off the beaten track. Buckshot has spiced up the maple whiskey game with this peppered bourbon. The American bourbon flavor is still present with woody notes in the palate- but slung in with sugar, spice, and all things nice.

The interplay of the maple sweetness and the peppery kick shouldn’t work- but it totally does. They’ve got the balance right and it’s a surprise hit that could be your new favorite.

We found it was best served straight but cold, so chuck the bottle in the freezer for a few hours.

Best for: the wildcard. A truly unique combination that will be the talking point of any table.

Sortilege is the most popular maple whiskey in Canada, which should tell you all you need to know. It has a lower alcohol content than most whiskeys at 30% ABV, which is handy if you fancy a couple of glasses. Which you will.

It still has that classic alcohol warming effect and texture-wise it seems a little thicker than the other whiskeys in this list. Maybe that’s the Quebec maple syrup.

Like Crown Royal Maple, Sortilege is sweet but not oh-my-god sweet. It is very, very drinkable and maybe a good jumping-off point for friends or family who aren’t used to drinking straight spirits.

If you want to take things up a level, go prestige.

Sortilege Prestige is the premium version and while regular Sortilege represents excellent value for money. it may be worth pushing the boat out here. Prestige is made with seven-year-old rye matured in white oak barrels- and this gives it a whiskey woodiness that isn’t as strong in the more straightforward original.

Best for: smoothness and easy drinking. Sortilege is unequivocally sippable, and the premium version is well worth pushing the boat out for on special occasions.

Available for $31 and $51 RRP respectively

What Can You Use Maple Whiskey For?

-A Couple of Recipes-

A bacon, maple, and whiskey trifecta that tastes like a feat of human greatness. It pairs perfectly with breakfast and is an excellent option if you’re looking to switch things up from your regular Bloody Mary.

For the bacon flavor, fry one rasher of streaky bacon until crisp and snap it in half. Blend one half and add to 2oz of maple whiskey.

Chuck in a couple of dashes of bitters and mix well.

Garnish with traditional orange zest peel, then add the other half of the bacon stick for an extra wow factor.

Serve over ice and enjoy a breakfast of champions.

These are great for staying up over the holidays.

Stir well, serve over ice and have yourself a zesty Christmas.

The scent of the cinnamon stick packs each sip with festive spirit- and the ground cinnamon balances the acidity of the lemon juice really nicely.

This is perfect for warming up over the winter.

Again, garnish with a cinnamon stick to smack your guests in the face with unbridled Christmas spirit.

Set up a big batch in a warmer for enough low-maintenance deliciousness to last all evening.

Or just use it as a sauce. Seriously.

The subtle maple in the Canadian whiskeys relies less on sugary sweetness and pairs well with vanilla ice cream. And naturally, it’s a hit when drizzled over pancakes in the morning.

You’re a grown-up who does what they want, okay?

Which One Should I Get?

Having been on the market for a few years, there is now a load of options available to find a maple whiskey to suit your palate.

You have a few main considerations when picking out the perfect bottle:

Price – Good quality maple whiskeys range from between $15 and around $50 for a 750ml bottle, and you can get plenty of bang for your buck in this range. Good maple whiskey is less reliant on lengthy aging for its flavor and therefore doesn’t cost a fortune.

If you’re drinking with friends and family, a sessionable maple liqueur may be a safer bet than a stiff bourbon that could take grandmas head off. Friday night with friends may benefit from the extra bite, rather than a weaker drink that says pancakes over party.

Maple Flavor – Does the maple function as a rich expression of the traditional flavor, or is it simply there to offer a sugary sweetness? Sweeter maple whiskeys are good for those with less experience drinking neat spirits but could be a little underwhelming for a veteran looking for a more nuanced palate.

Below we’ve highlighted some of our favorites which are readily available in the US and Canada with something for every budget.

Let’s get into it.

Okay Fine Maybe The Best Maple Whiskey is the Most Delicious Substance on the Planet- But What on Earth Do I Do With My Life Now?

There’s a perception amongst whiskey fans that flavored whiskeys are just not very good. What may well have started as a gimmick has certainly become something else, with these blends cementing themselves as favorites for the people who take a chance on them.

If you’ve enjoyed broadening your horizons, maybe open yourself up to the idea of other tried and tested flavor combinations. Most of the providers in this list don’t stop at maple and offer other twists on their original whiskey.

Maple lends a sweetness that makes whiskey more palatable, so perhaps experiment with flavors that function similarly. Honey is a great option for adding a flavorful zip that isn’t just sweet for sweetness’ sake.

Similarly, fruit combinations can mellow out more earthy whiskeys and transform them into an easy-drinking treat. Apple, peach, lemon, and lime are some of the more popular options and are good places to start.

Want to learn more about whiskey? Check out our guide here!