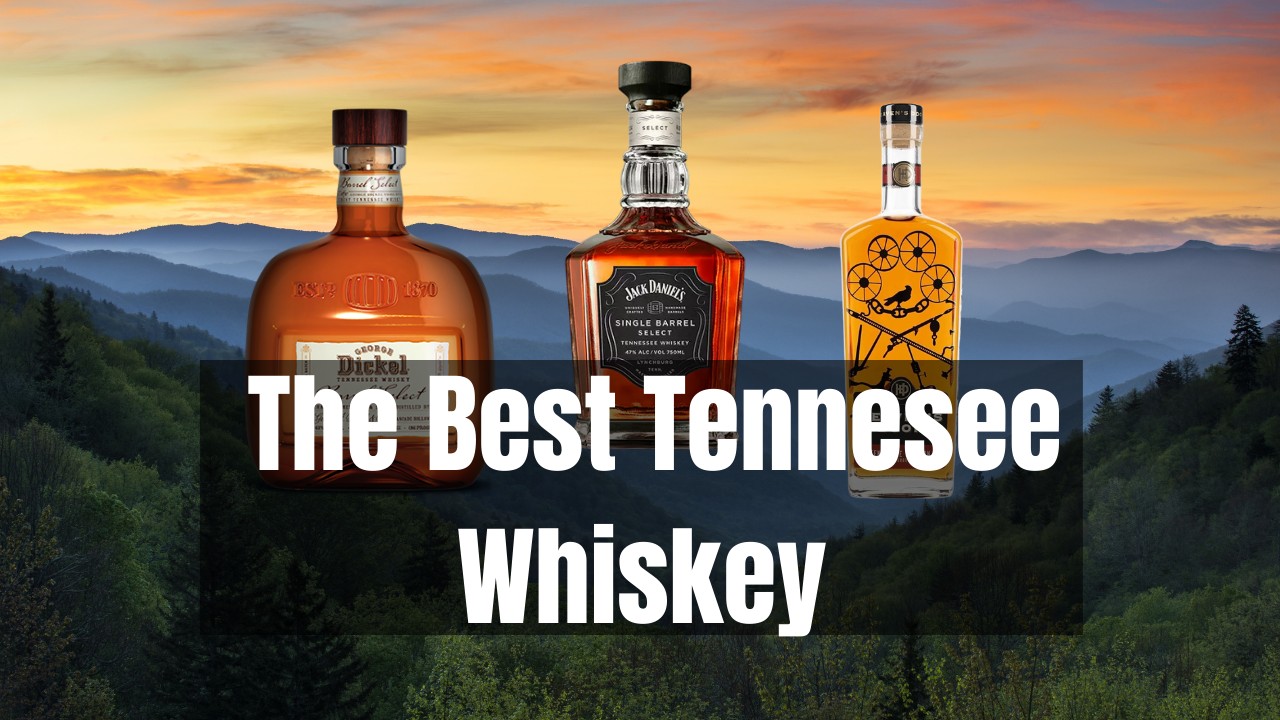 The best Tennessee whiskey and Bourbon have a lot in common. Both must use a corn mash blend of at least 51%, before being matured in charred oak barrels.

The defining characteristic in Tennessee whiskies is the Lincoln County process. Here the whiskey is filtered through maple charcoal, which removes impurities and smooths out the flavor to produce a mellower dram.

Also, those charred oak barrels? Bourbon barrels can be reused, but to qualify as a Tennessee whiskey distillers must use fresh barrels for each production cycle. The use of fresh wood in Tennessee whiskey tends to mean those oak flavors are more prevalent, rather than a sole emphasis on the grain itself.

Despite being home to some of the most productive whiskey producers in the world, Tennessee is a dry state by default. A number of the counties have had their laws repealed, but global brands like Jack Daniels still are legally unable to sell their alcohol directly. Instead, they have to technically sell them as ‘decorative objects’. Maybe that’s why their bottles look so cool.

In this guide, we’ll step through the best Tennessee whiskeys available on the market today, whether you’re just starting out or looking to try something off the beaten track.

When you’re thinking of Tennessee whiskeys, Jack Daniels is the first name that comes to mind. It’s one of the most well-known and best-selling spirits in the world.

Some seasoned whiskey veterans will turn their nose up and call it low-brow, but in blind taste tests, Jack Daniels will outperform many premium top-shelf whiskeys. It’s an affordable and uncomplicated benchmark by which all other Tennessee whiskeys should be measured, and can count celebrities such as Keith Richards and Frank Sinatra among its fans.

Produced in America’s oldest distillery, Jack Daniels uses a maple charcoal filtration process to enhance smoothness. The slightly sweet, oaky flavor is elevated by notes of banana and vanilla, resulting in an unpretentious blend that represents great value for money.

Best for: Getting Started

Jack Daniels is synonymous with Tennessee whiskey, so give their original and most popular offering a try to find your feet.

Uncle Nearest has a little bit more going on in terms of deeper, earthy flavors, while still a bonafide Tennessee whiskey at its core. Each bottle is aged for a minimum of seven years, and like Jack Daniels, Uncle Nearest credits its charcoal filtration process with the whiskey’s smooth quality.

And it seems like they’re right – this is certainly a smooth dram that goes down easily.

The name honors founder Nathan Green, who was referred to as Uncle Nearest by his friends and family. He was the first African American master distiller on record and taught fellow distiller Jack Daniels (yes, that one) everything he knew.

The nose is nutty. Real nutty. That continues through the palate, combining with a tasteful oakiness and some smokey char. It is strong at 50% ABV, and drinking it neat will give you a decent level of burn in the chest.

The palate is no-nonsense. Caramel and vanilla come in heavy doses, and the subtle oakiness on the finish doesn’t outstay its welcome.

Best for: A Good Whiskey Sour

The nuttiness cuts through and offers a welcome balance to citrus zest.

Knock knock knock. Heavens Door Double Barrel combines two six-year aged mash bill whiskeys with a six-year aged rye whiskey, before allowing the blend to mature together for an additional year. That’s a lot of time to put into a dram, but it is clear with this blend that good things come to those who wait.

First, the nose offers deep oak and a pinch of cinnamon. Moving to the palate, that oakiness is joined by fruity apricot and a little vanilla sweetness. The finish is a long-lasting caramel that smooths out some prickly pepper.

The distillery is in a 160-year-old church in Nashville and was started with the help of a certain Bob Dylan. Unlike a majority of celebrity-endorsed products which flatter to deceive, this one hits the mark, winning gold medals across the 2018 San Francisco World Spirits Competition, the 2018 New York World Wine and Spirits Competition, and the 2018 Ultimate Spirits Challenge.

This whiskey has a great story and lengthy aging process which combine to make you feel like you’re stepping back into the sixties with each sip.

This premium offering from Jack Daniels doubles down on what is so great about the original. Those notes of oak and banana (well, maybe closer to banana bread) are still present but elevated by a more complicated ‘double mellowing’ process which filters the whiskey through the Lincoln County process for a second time.

As you’d expect for a true Gentleman, it’s incredibly smooth. There is still a warming effect, but that never strays into the harshness of burning. At all.

If you like where the flavor profile of regular Jack Daniels is going, but can’t bring yourself to drink it neat, this is an option worth exploring,

Best for: The Bachelor

A lot of people won’t know they’re fans of Tennessee whiskey but will know they enjoy Jack Daniels. Gentleman Jack is a natural progression that brings more complex notes and feels like a premium and sophisticated product.

Aged for 10-12 years, George Dickel Barrel select offers a thick and velvety mouthfeel that unveils a rich palate of spice and vanilla.

Only ten barrels are selected each year to be used in their small-batch production – so master distillers are only selecting the best of the best. This attention to detail means that the price runs a little higher than some of the other Tennessee whiskeys on this list – but it will certainly justify itself once you’ve had a sip.

Best for: The Connoisseur

Over a decade aged and with more awards than you can shake a stick at. Crack open a bottle to impress your Bourbon or Scotch drinking friends who didn’t get the Tennessee memo.

Corsair certainly lives up to its name – this Tennessee whiskey is all about smokiness. While common across scotches, strong smokiness in Tennessee whiskies or bourbons can prove a little polarizing. Here, three different smoked malts combine to create a blend that, while unabashedly smokey, offers enough in the way of complexity to round out that dominant flavor.

On the nose, the smoke hits you like an outback barbecue. Each sip is manageable with the inclusion of fruit notes- notably cherry and orange- which stop the char short of overwhelming the palate. While perhaps not what you would drink every day. Corsair Triple Smoke offers something a little different and is certainly a memorable dram.

As the defining element of the palate, smoke dominates the love-it-or-hate-it blend. If you love char and bonfire notes, this is the way to go.

Okay, you might have noticed that Jack Daniels have a lot to say for themselves in this list- but frankly, they know what they’re doing. Another step up in both quality and price, Single Barrel will take you up a league in terms of moving from a basic to mid-range Tennessee whiskey.

It does what Jack No7 does, but shifts up a gear.

The nose combines toasted notes with orchard fruits and golden syrup. The palate knocks through the fruit with nuttiness and honey sweetness, adding some spice and pepper too. All of the oak from regular Jack Daniels is still there, sharing the barrelling process- but somehow it’s not as sweet. Oak and honey are a killer combination and works to great effect here.

Each batch is drawn from a single barrel- hence the name- with each being selected by a master distiller to ensure the highest quality.

It’s not as sweet as regular Jack Daniels, which will probably come as a relief to scotch drinkers who find it too drinkable as it is.

JD Single Barrel makes a great option as a gift because you can get the bottle engraved. I can certainly think of worse things to unwrap and play with on Christmas morning.

This blend takes everything that works in Uncle Nearest 1856 and doubles down on it. The nutty, smokey elements are still there but complexity is added with a bouquet of orchard fruits. The nose is heavy blackberry and blueberry, turning to jam on the palate with sweet caramel and candied cherries.

There’s more desert-like complexity in the single barrel expression than its cheaper cousin. Notes of Christmas cake, cloves, cinnamon, and vanilla are sumptuous – 1865 is downright moreish.

Grounding notes of dark chocolate and tobacco in the long finish round things out nicely. It feels indulgent and relaxing like you’re easing into a comfortable old leather armchair by the fire.

It is probably my favorite on this list purely because it brings the richness of dessert flavors without being overly sweet. I’d certainly recommend it as a next step once you’ve tried something more straightforward to compare it against.

Best for: Winding Down

The decadent palate is perfect for relaxing with friends after a long day. Of all the options on this list, this premium expression brings the most in terms of complexity and sophisticated flavors.

It’s aged in small oak casks which are designed for maximum transfer of flavor from cask to whiskey. This gets reflected in a woodiness that thuds through the palate – oak is the dominant flavor for sure.

Collier and McKeel Tennessee whiskey has a twist on the traditional Lincoln County process, pushing water directly into the charcoal rather than using gravity to drip it through.

All of the ingredients are locally sourced, from the lumber they use to make charcoal to the family-managed pure water sources.

The palate is oak central – maybe with a little vanilla. When you take a sip a bit more sweetness comes with honey and floral notes. This blend tastes like being outside in a forest picking flowers.

Crisp natural notes of oak and wildflower dominate here, producing a flavorful blend that doesn’t stretch itself too far. If you’re unimpressed by some of the more elaborate blends and just want to get back to basics, Collier and McKeel have got your back.

A Couple of Recipes

Here are our recommended recipes to pair with the best Tennessee whiskeys.

Whiskey sours will always grab attention, and when they’re made with a bold Tennessee whiskey they simply go up another level. Make a batch for friends at the start of a party and let the good times roll.

A couple of dashes of Angostura bitters

A twist of lemon zest

Another pairing with a little zest, Lynchburg Lemonades are perfect for cooling off at a barbeque on a summer’s day.

It’s one of the best ways to present Tennessee whiskey in a way that will go down across a range of drinkers, regardless of their experience with whiskey. This recipe has stood the test of time for a reason-they seem to me to be a near-universal hit.

P.S – For Raspberry Lynchburgs, swap out the lemon juice for raspberry compote. This twist is something a little different that still keeps the sour zip of the original.

[icon name=”info” prefix=”fas”] Looking for some more whiskey help? Check out our other guides below: