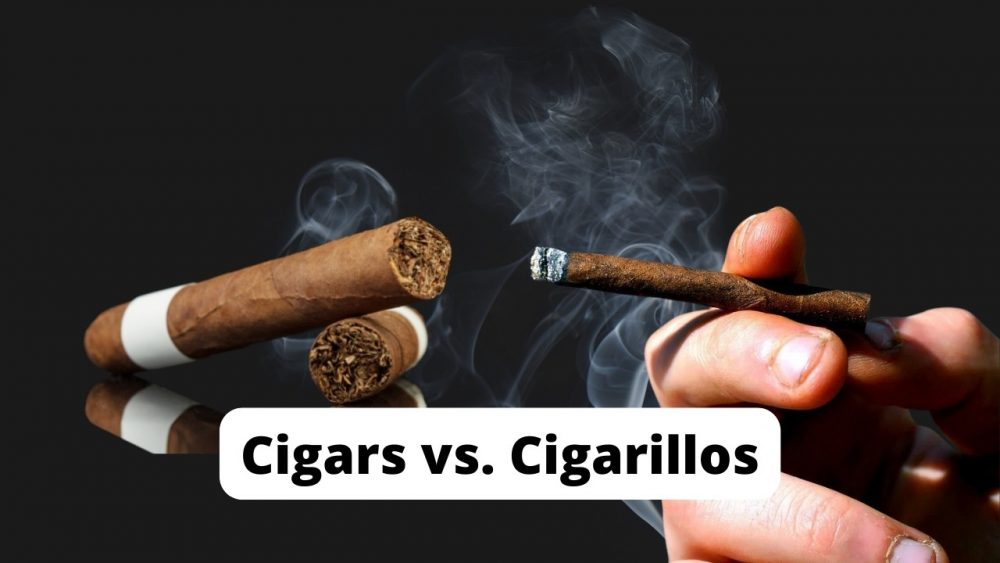 Maybe you’re new to the cigar world, or just want a different experience from your usual smoke. Or maybe you don’t have time for a full cigar in the afternoon but still want the experience. Cigarillos are an ideal solution—they’re small, mild, and easy to smoke in a short amount of time. But what’s the difference between a cigarillo and a cigar?

If you’re curious about the differences between these two kinds of smoking, this guide should help. We’ll discuss what sets them apart from one another—so that you can make an informed choice for your individual needs or wants.

The Differences Between Cigars and Cigarillos

While many cigar smokers are loyal to one particular cigar size, most tobacco aficionados enjoy smoking different sizes depending on the situation. Many serious cigar enthusiasts enjoy smoking large cigars. But the cigarillo has a large following among those who enjoy smaller smokes.

Cigars and cigarillos are both made from tobacco leaves, but there are key differences between these two products. Let’s take a look at how these two compare side by side.

You measure cigars and cigarillos by their length in inches, as well as the diameter of their rings.

Cigars generally come longer than cigarillos and range from 4.5 to 7.5 inches in length depending on the brand. The ring gauge of a cigar is the circumference of its body at its widest point. The average size for a cigar is 38 to 60 ring gauge; anything smaller than that would be considered a cigarillo.

Cigarillos measure approximately 3 to 5 inches long, which is longer than a cigarette but smaller than cigars. A cigarillo’s diameter typically measures around 6 mm.

Some cigarillos are made with a replacement wrapper instead of pure tobacco leaf. Cigarillos sometimes feature filters; however, most premium cigars do not come filtered.

Due to their low cost of production, machine-made cigarillos are typically cheaper than handcrafted cigars. You can buy them for less than $1 each.

Cigars are handmade and generally contain more tobacco than cigarillos. As a result, they typically cost anywhere from $5 to $30 or more.

Cigars come in a range of sizes. A Petit Corona is 4.5 inches long, while the Gran Corona is 9.25 inches—but most cigars fall between 5 and 10 inches.

Cigarillos are shorter than regular cigars and tend to measure between 3.5 inches and 4.5 inches long.

The smoking experience of a cigarillo depends entirely on the kind of tobacco you use. Cigarillos and cigars are made with the same blend of tobacco and wrapper. That means they offer similar aromas and flavor profiles.

Cigarillos often have a sweet-flavored wrapper and are usually smoked during the day when it wouldn’t be as convenient to smoke a cigar.

Cigarillos are often flavored with additives, giving them both a distinctive scent and taste. Popular gas station cigarillo flavors include honey, bourbon, berry – and even banana.

Because cigars and cigarillos are different sizes, they take different amounts of time to smoke. You can typically smoke a large cigar for about an hour, while your cigarillo might only take a few minutes to finish.

Many smokers prefer not to waste a larger cigar when they don’t have time for a full smoke. If you’re on the go and don’t have time to set aside a full hour to smoke, you might want to consider a cigarillo!

Cigarillos are made with shorter-cut tobacco than cigars, so they burn hotter and faster. This means that cigarillos have a shorter lifespan. If you’re looking for something to enjoy throughout the evening, stick with cigars instead.

Cigars vs Cigarillos: Which Is Better?

Cigarillos are cheaper than cigars, making them easier to afford for casual smokers. Cigarillos are also easier to carry around when you’re on the go. If you want something stronger than cigarettes but less intense than a cigar, you should try a cigarillo!

Is a Cigarillo Just A Small Cigar?

In Spanish, the word cigarillo means “little cigar.” Cigarillos are a type of small cigar typically wrapped in tobacco leaves or brown, tobacco-based paper. While cigarillos are sometimes considered a lower-quality product than regular cigars, this isn’t always the case.

Cigarillos are usually shorter in length than traditional cigars, and they have less tobacco inside them. However, they’re more widely available than cigars, come in a wider range of artificial flavors, and are usually cheaper.

What Are The Best Cigarillos You Can Buy?

I looked at the best cigarillos you can buy, both from the perspective of flavor and cost. Here are my top picks:

Cigarillos are sold in packs of 5 to 20 or more. Most cigarillo brands are made from lower-quality tobacco than regular cigars, but some high-end brands use the same tobacco as their larger counterparts.

What Are Some Popular Cigarillos for Beginners?

If you are a beginner smoker or are looking to buy your first cigarillos, then there are a few options that I would recommend. The following is a list of some popular cigarillos that you may want to consider if you are new to smoking:

These cigars tend to have a milder flavor profile than others on the market. They also tend to cost less than cigars.

You can find cigarillos in a variety of flavors, including menthol, vanilla, cherry, and chocolate. Cigars are typically available in natural or Maduro wrappers. The former is generally milder than the latter.

How to Smoke a Cigar vs a Cigarillo

There are a few similarities between smoking a cigar and smoking a cigarillo. For example, you’re going to need a lighter or match and something to light your cigar with, like some matches or maybe even an electronic lighter. I try to avoid using a gas lighter, as they can affect the flavor of your smoke.

Because cigarillos and cigars have more tobacco than a cigarette, you shouldn’t smoke them like one! After you’ve lit your cigar or cigarillo, breath the fumes into your mouth to get a taste of the flavor, but don’t inhale: this could make you nauseous or give you a headache.

Instead, you’ll want to puff your cigarillo or cigar, get a taste of the smoke, then breath it out through your mouth without inhaling. You only need to do this about once a minute with a cigar.

Because cigarillos are thinner and have drier tobacco, they burn faster than cigars. I strongly recommend keeping an ashtray handy so you don’t ruin your clothes or furniture.

Do Cigarillos Taste The Same As Cigars?

Unflavored, unfiltered cigarillos can taste and smell very similar to cigars. As with cigars, the tobacco used in cigarillos is cultivated from a variety of different plants. The wrapper leaves come from the same species of tobacco plant as those used for making cigars.

Do You Inhale Cigarillos?

Cigarillos are smoked in the same way as regular cigars: you do not inhale cigarillo smoke. Hold the smoke in your mouth for a few seconds, then exhale slowly.

Are Cigarillos Stronger Than Cigars?

Cigarillos contain about 5 grams of tobacco and 100-200 milligrams of nicotine. A person can absorb 1 to 4.5 milligrams of the latter substance when smoking one cigarillo.

Cigars, meanwhile, are made up of between 5 and 20 grams of tobacco with at least 100 milligrams of nicotine.

Even though you don’t inhale, the nicotine from either will still affect you. Cigarillos contain less tobacco than cigars and are therefore not as strong.

I hope this guide has given you some insight into the world of cigarillos and that it helps you find a new favorite smoke.

Cigarillos can be enjoyed by anyone from experienced smokers to those just beginning their journey into the world of cigars!

Check out some of our guides for more: