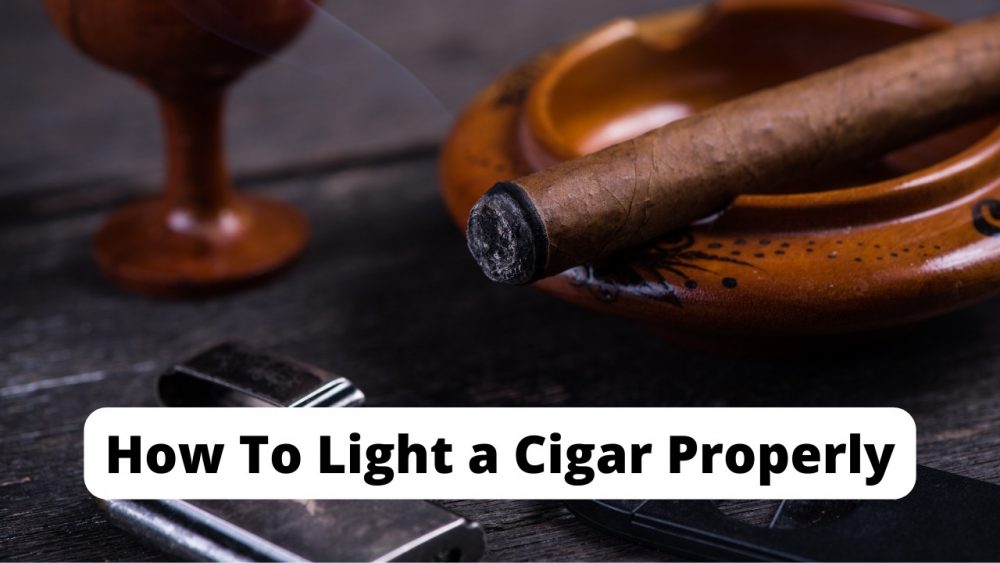 Whether this is your native voyage or you’re an experienced cigar smoker, it seems like there is always something more to learn while enjoying the aromas of a fine cigar.

I find that you run into people who think of themselves as aficionados but are simply pretentious and judgmental. Many people believe that their way of smoking a cigar is the best and are entirely too prepared to tell you why you are wrong. You bought the cigar, so it’s up to you to treat it how you please.

However, some methods will undoubtedly enhance your experience, so let us explore how to light a cigar properly.

All in the Technique

When I entered the workforce, my construction foreman had a cigar in his mouth nearly every minute of the day. He would pop the cigar in his mouth and light it like Hannibal from the old A-Team series; I’ll admit that it seemed cool.

When I started smoking cigars, that became my habit too. But, as I broadened my horizons to smoking in clubs and lounges, I began to realize that there are many methods to light, smoke, and enjoy a cigar.

The method that creates the best experience is first to toast the foot of the cigar before you throw it in your mouth. Toasting the foot ensures an even burn and prevents charring the tobacco, resulting in an aroma that is in harmony with the experience the artisans crafted for you to enjoy.

You can toast the foot by holding your cigar at a 45-degree angle. Do this instead of holding the cigar straight up to avoid burning all of the filler tobacco inside. If you hold it at a parallel angle with the ground, you risk barely lighting the surface and not getting a sufficient ember that maintains an even burn as you smoke.

Lighting a cigar is ritualistic, and patience is critical. Beyond the 45-degree angle, you will run a soft flame around the rim of the foot of the cigar. From the edge of the rim slowly work your way to the interior where the filler tobacco is. Ensure that the cigar is never in the flame but rather just above the flame so that the wrapper, binder, and filler tobacco are not charred.

After you have efficiently and evenly coated the foot of the cigar in heat, you’ll turn the foot towards you and examine your work. Make sure that no black remains, but there’s an even distribution of embers across that face.

If it looks satisfactory, you will then gently blow on the foot to encourage those embers. After this has been accomplished, you can turn the cigar back around and take your first puff from the cap. Draw those embers in a bit further with that puff, making sure not to inhale.

It’s a bit of a process, but I believe it enhances the experience and allows me to enjoy all of the cigars’ flavor profiles. A few questions are going to come up, though.

When you’re sitting in a cigar lounge, you will start hearing many opinions. Beyond toasting the foot, how to light a cigar properly will depend on the types of flames and types of cigars. We’ll start with the types of fire for lighting the cigar first.

Which Lighter Should I Use for a Cigar?

I fancy myself to be a traditionalist, and as a result, I don’t prefer the use of a lighter. If I’m honest, though, there are occasions where I will use a lighter. If I’m outside, the wind will quickly put out a soft flame.

How To Light a Cigar With a Torch Lighter

Many people are against using blue flames, but a torch lighter will be ideal on a windy day as the breeze won’t put out the blue flame. Most people have a problem with the blue flame, but that’s because they put the flame directly on the cigar.

The blue flame is much hotter than a soft yellow flame, but if you keep your distance, it will be fine. Make sure that the blue flame never touches the rim or the filler tobacco. Just hold the cigar above the flame and let the heat rise. Again, don’t be in a rush. When I don’t do this patiently, I end up charring the tobacco and tasting a bitter flavor.

How To Light a Cigar With a Zippo

I’ve heard some people say not to use a Zippo lighter, and traditionally I’d say that would be true because most Zippo lighters use gas. It will be alright if the lighter uses an odorless fuel such as butane, though.

Keep in mind that you don’t want to introduce a new odor into your cigar since it will mask the aroma of the cigar, defeating the purpose. To avoid this, let the foot burn for a few moments after lighting it so the liquid fuel residue isn’t transferred to your cigar.

Cigars can range from just under $10 to well over $100, so when I invest my cash into the aromatic experience of cigar smoking, I don’t want to taste gas.

How To Light a Cigar Without a Lighter

As I said before, I’m a bit of a traditionalist, but I try not to be too pretentious. Lighters are alright, but my preference is to use a match since that would denote a soft yellow flame. I feel that tradition is tied into the ritual of lighting a cigar and using matches just feels more gentlemanly.

However, some matches contain sulfur. Some people will light the match and allow the sulfur to burn off before putting the flame on the cigar. I find that to be a bit risky since the sulfur odor gets introduced to the cigar, thus ruining the flavor.

The principle of lighting the cigar remains the same since you’re going to toast the foot. Some cigars are going to have slightly different wrappings, though. This is significant because the foot could be built in a slightly different way, thus resulting in a different type of burn. This will impact which cutter you use more than the way you light the cigar, but there are a few things to note.

There are a few different types of Cohibas, including Parejos and Figurados. Parejos have a straight and uniform foot allowing for a fairly uniform burn on the commencement of the lighting process. I find that this predictable burn allows me to focus on the flavor rather than worrying about maintaining the embers.

Things get a little more complicated when you get into Figurados, closed foot, or torpedo cigars. Their wrapping tapers towards the end of the foot. Some cigars with a tapered end have a shoulder that wraps from the foot’s face and around the wrapping just a touch.

This is important to know because that portion of the foot is built out of a different part of the leaf than the rest of the wrapping. You can expect some inconsistencies in the burn as the embers transfer from the wrapping on the foot to the body of the cigar.

I find that the lighting process stays much the same but the smoking experience is what changes because you’ll get more flavor from the varying wrappers at the end of those cigars.

Why Do Cigars Not Stay Lit?

There are many reasons why a cigar might not stay lit, but I like to start by first blaming myself. I spent years failing to toast the foot, so I feel user error is typically a safe assumption.

You might need to relight a cigar because you could be drooling on the cap of the cigar, making it too moist. That could impact the draw and the ember’s ability to crawl slowly up the shaft.

You also might be failing to puff enough during your smoking experience. Something that I find to be helpful is to do a one-quarter turn after every few puffs. This ensures that I’m evenly distributing the burn since heat rises. An uneven burn can be problematic, meaning you might have to clear some ash off before a relight.

Before you even start the lighting process, however, you should have inspected the cigar. After pulling the cellophane wrap off the cigar, I like to roll the cigar in my fingertips near my ear.

I’m listening for the perfect amount of crinkle. If the crinkle sound is too little, that means the cigar is over-humidified, but if it’s a very strong crinkle like fall leaves, then that means that the cigar was not humidified enough and is dried out.

If the cigar is over-humidified, it’s too moist and likely unable to maintain the embers even if you light it properly. Cigars need to be stored in humidors and rotated or turned every four to six months. Rotating the cigars where they lay will ensure that the humidity is evenly distributed.

How To Relight a Cigar

Whatever the cause, sometimes cigars go out, and they need to be relit. If you had an uneven burn and you’re noticing one point to be a little bit longer than the other, then light the longer part. Doing this re-establishes an even burn across the face.

An essential step of relighting the cigar is to break off the ash. I do this with the back of a match and pick out the undesirable contents. As you relight the rim, you’re going to maintain much the same process as when you toasted the foot and blew on its face but with one exception.

Instead of taking a puff in, you’re going to push that first puff out. A lot of impurities and tar will settle as the cigar goes out, so pushing the contaminants out by puffing out on the cap is crucial.

Another option is to recut the cigar. Only do this if you have a personal cutter, so it is sanitary.

If you do a recut, ensure you push out that first puff instead of drawing it in. Those impurities mentioned before could have still developed further up the cigar.

FAQ – How to Light a Cigar Properly

Got some lingering questions about lighting a cigar? Check out a couple of the most commonly asked questions.

Does it matter how you light a cigar?

You bought the cigar, so it is yours to enjoy how you like. But using a yellow flame will produce the least risk, and toasting the foot ensures the purest aromas and an even burn.

What is the best way to light a cigar for beginners?

Remember to take your time. Lighting a cigar is a bit of a ritual, so make sure you toast the rim by working the flame slowly around the rim of the cigar. You can visually observe that all the black on the foot of the cigar is gone. If the black is not all gone, the cigar is not ready to puff.

You have all the basics in lighting a cigar, so give this a try and be humble enough to learn something new from your contemporaries.

Then, as you are socializing in a lounge, ask those like-minded folks how to light a cigar properly and see if it lines up, but if it doesn’t, give their idea a whirl.

If you enjoyed learning about the proper way to light a cigar, check below for more of our guides: