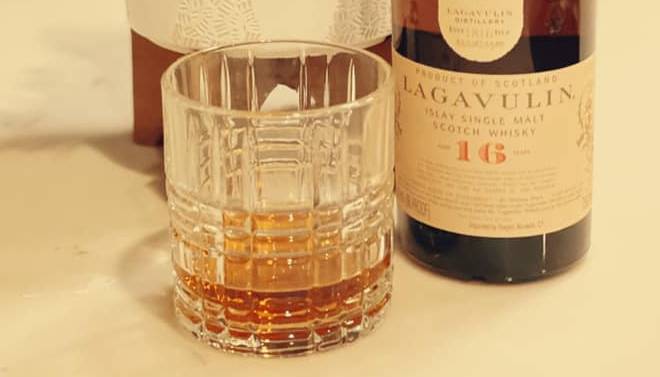 My friend Vince once told me about the first cigar he ever smoked. While most people tend to grab a lighter, “lower level” cigar, Vince went for the Padron 1926 Anniversio. In other words, when he started smoking cigars – he did it right!

If you want to begin your journey into the world of Islay whisky “the right way”, a Lagavulin 16 year old is the way to go. It may not be the most gracious or the easiest of introductions, but it’s one of the best.

Upon withdrawing the bottle from the box, the first thing I noticed was the deep amber gold color and the old style whisky label. Which together, makes for one elegant bottle of whisky – not a bad looking bottle to have sitting on the counter.

Nose – Can definitely pick up this is an older, sophisticated whisky. Peat, smoke, black tea, and a slight sweet tobacco.

Palate – There’s a mild, restrained sweetness of citrus, a touch of spice and wood, and a dominate peak smoke.

Finish – Most would say it has a long lasting finish, I found it to be somewhat short,  (Which isn’t necessarily a bad thing) although some sweetness lingers.

One of the oldest distilleries on Islay, Laguvlin (pronounced laga-Voo-lin) has been producing high quality whisky for over 200 years. Situated between Ardbeg and Laphroaig, picturesque Lagavulin is known as “the king of Islay”. Revered by connoisseurs and experts, the famous 16 year old has consistently received extremely high scores.  It is considered a fundamental part of Islay’s whisky heritage.

Legally founded in 1816 by notable local, John Johnston,  however, illicit distilling on the site has been recorded as early as 1742.

Today, the importance of Lagavulin 16 cannot be understated. Not only because of its history, but also because of the legions of people who’s eyes have been opened to the world of a peated dram thanks to Lagavulin 16 year old.

Widely available and reasonably priced at around $100 for a single malt aged in oak casks for 16 years.