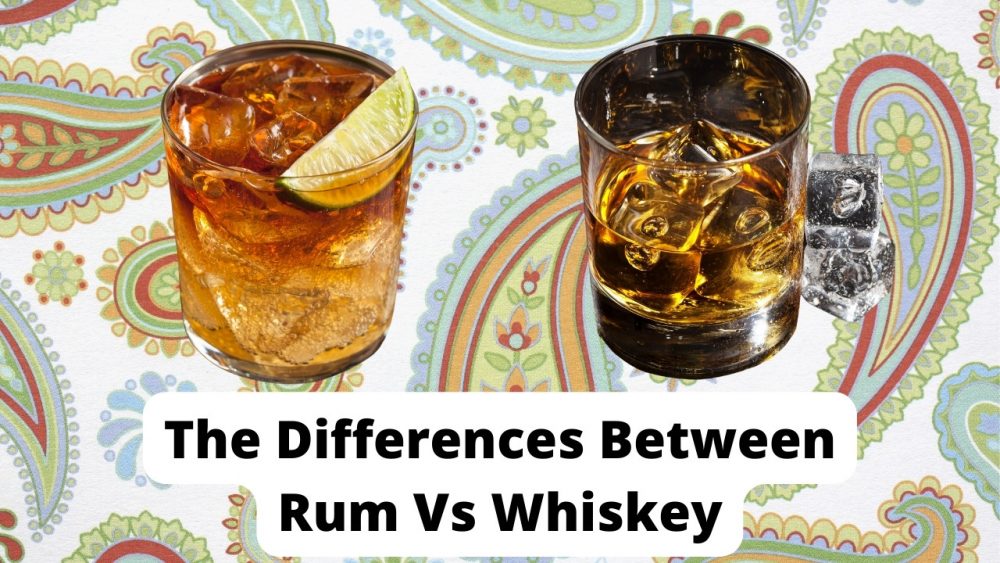 Rum and whiskey are two of the best go-to drinks for cocktails or just a simple neat nightcap. But what’s the difference?

The main difference between rum and whiskey is the ingredients used to make it. Rum is made from one ingredient, sugar cane juice (molasses). Whiskey is composed of different grains, including rye and wheat. Whiskey is also aged longer.

Are you a whiskey or a rum person? It doesn’t matter, hop in and learn the difference between the two.

Differences Between Rum Vs Whiskey

What Exactly is Rum?

Each is better than the other for different things. Rums are aged more quickly than whiskeys, giving them more alcohol levels.

Rum is used to make various quality drinks, such as your favorite Daiquiri, Mojito, and Pina Colada. Some people add sugar syrup to their rum shots to add sweetness to each sip.

Check Out the Most Popular Rum Brands Here

What Exactly is Whiskey?

Whiskey is made from a combination of fermented grains. These grains can be rye, wheat, corn, or barley, depending on the manufacturer and the type of whiskey being produced. There are many whiskey types, such as honey whiskey, bourbon, and single malt.

Whiskey is usually mixed with other beverages to create a new taste bud experience. Some people’s favorites are highball, whiskey smash, horse neck, etc. Though, you can still drink neat.

Check Out the Most Popular Whiskey Brands Here

Rum often has a sweeter, richer, and spicier flavor and aroma

Some spicy rums are mixed with cloves, star anise, cinnamon bits, and other ingredients to amplify the bite that spicy drink lovers yearn for.

Whiskey variations offer plenty of different flavors. For example, honey whiskey has sweetness, while spicy whiskeys will give you an extra kick.

Rums have different variations, such as black rum, white rum, and much more.

Despite having different types, the whiskey has only one distinctive color: dark to golden brown. This makes it hard to know what’s in front of you.

The History and Origins of Rum and Whiskey

Let’s jump into some of the histories of rum and whiskey. Both these beverages have been around for a very long time and have an intriguing timeline of events.

The oldest proof of rum can be tracked down way back in 1650 in Barbados. The famous rum we know today was invented on a sugar cane farm in the Caribbean. They discovered they could make an alcoholic drink from cane juices.

Due to the warm environment of the Caribbean region, rums are often aged faster than other drinks. That’s also the reason why its alcohol level is generally a little higher than most whiskeys.

The first whiskey production can be dated back to 1000 years ago. It was invented by medieval Irish and Scottish monks in Scotland when they discovered you could use grains and yeast to make whiskey.

Today, these two different countries make their own unique whiskeys; Ireland made Irish whiskey, and Scotland made Scotch whiskey.

As whiskey became famous worldwide, different countries have also produced their own unique variations. A good example is bourbon whiskey, which became a massive hit in the United States.

Common Questions On Rum Vs Whiskey

Let’s take a look at some common queries you might have about rum or whiskey.

How are Rum and Whiskey Made?

Rum is made by fermenting raw sugar cane juice. After that, manufacturers distill the young rum to prepare it for a few months of aging; the last part is blending for desired flavors.

Whiskey, on the other hand, goes through a longer process.

In making whiskey, manufacturers mix the chosen grain types first before fermentation. After fermentation, they distill the whiskey before aging it for at least three years; some go over five years to reach a more mature and distinctive flavor.

The process of making these two drinks is pretty similar. The only difference is the grain mixing process and the longer maturity time on whiskey.

Check out our other whiskey guides below: