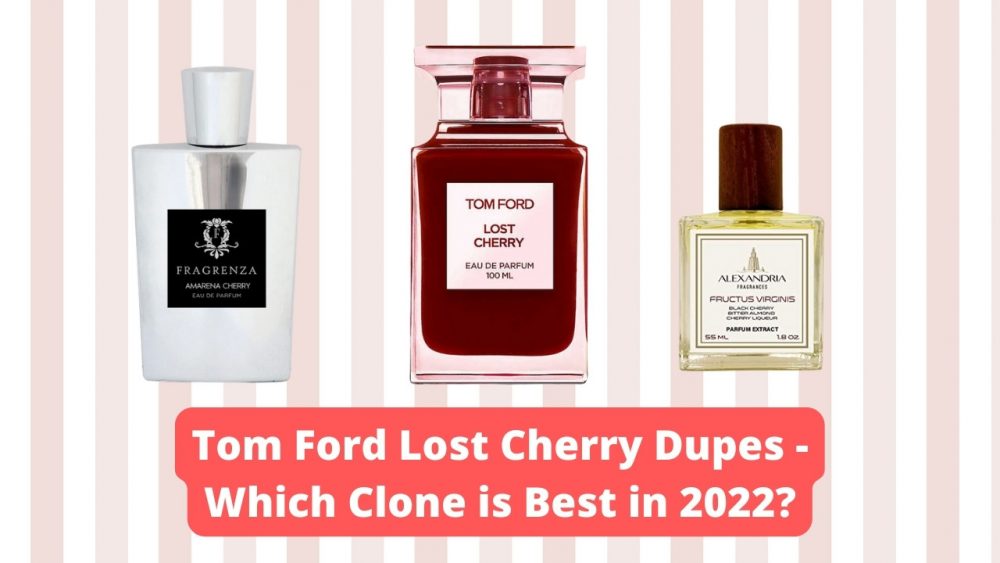 Lost Cherry is one of my favorite Tom Ford Colognes, but one thing I’m not exactly enamored with is the price tag.

It’s pretty expensive, and there have been times when I’ve held off on using a particular fragrance because I feel the need to save it for a more special occasion.

Excellent longevity. Fructus Viriginis will last at least 8 – 9 hours from just a couple of sprays.
Plenty of cherries, but not quite the same nuanced florals as the original.
Available at:
AMAZON HERE
Best clone overall

The price is so low that you start to wonder what the catch is. Brilliant value.
The classic cherry/almond combo, but this time with a touch of berries.
Available at:
AMAZON HERE

About a year ago I decided enough was enough. I went on a search for the best Lost Cherry dupes on the market – and I’m going to share them with you

Some of my picks are a like-for-like copycat of Lost Cherry, while some overlap more loosely, sharing similar accords but holding their own distinct character.

Dossier isn’t shy about the fact that they’re in the business of clones. While others will give a nod and a wink to suggest their fragrances are “inspired by” designer houses, Dossier considers their imitations a badge of honor.

They aren’t shy about the subtly named Ambery Cherry is a Lost Cherry dupe, and it’s my top pick for a reason – they get incredibly close to the original.

The cherry and almond opening is playful and sweet. It strikes a perfect balance between gourmand and sophisticated, with this cherry liquor sense mature enough to be taken seriously.

After a couple of hours, the boozy cherry makes a bit of space for warm cinnamon and fresh rose to make an impact. During the dry down, you’ll notice rich vanilla and a hefty dollop of amber help the dupe migrate from sweet cherry extraversion to something more balanced and mellow.

The only major distinction I’d draw between Ambery Cherry and Tom Ford’s Lost Cherry is the longevity of the cherry note. In the Dossier dupe, the cherry shifts progressively into the background, but it’s front and center for the whole ride with Tom Ford.

The cherry is always there in the clone, but it only matches the strength for the first 2 – 3 hours in my estimation. For that period at least, it’s almost a direct clone.

Still, for the price, Ambery Cherry more than justifies itself as an impressive Lost Cherry alternative, and I’d recommend it to anyone looking for the closest fragrance note-for-note.

Wow, this thing kicks out fragrance. Fructus Virginis lasts 8 – 9 hours, but the key here is that the cherry note lingers on for the whole lifetime. I’d probably say that the cherry note itself lasts longer in the Alexandria dupe than in the Tom Ford Original, where it sort of vacates in the base notes.

But like most things in life, there’s a trade-off.

By emphasizing the cherry accord, there isn’t as much space for the lighter florals you find in Lost Cherry. There’s a rose note in the heart, but it’s sort of synthetic-smelling by comparison, and can’t match the subtly found in Tom Ford. It’s not disruptive by any means, but it’s not grippingly amorous either.

A soft base of tonka and sandalwood lends Fructus Virginis a cushioned landing that will keep you coming back for more. It’s a safe blind buy, sent from heaven for cherry lovers.

I’m a big fan of Zara colognes and given their record of producing impressive imitations it wasn’t a huge surprise to me to find they’d had a crack at Lost Cherry.

For a fragrance that costs less than 10% as much as the Tom Ford version, it’s really impressive. The cherry and almond top notes are vibrant and natural-smelling, but this time there’s a touch of plum or berries that tilts the cologne more fruity than boozy.

So, it’s not a total clone, but it harnesses the vast majority of what makes Tom Ford’s Lost Cherry great for pocket money prices

As you’d expect from a budget clone, the performance here isn’t exactly beastly, but you’ll still get around 6 hours out of this dupe. The main difference is that the projection is a little lighter. It’s like a more intimate version of Lost Cherry, detectable when you’re 2 – 3 feet away rather than filling the room with fragrance.

This cherry fragrance follows the classic Dior principles of sophistication and refinement. This powdery, elegant blend employs floral touches of lavender and rose to help turn cherries into something really special.

In the opening, Feve Delicieuse employs that tried and true cherry and almond bittersweet synergy to great effect. It smells opulent, with a creamy booziness arising from a blend of tonka, vanilla, and caramel.

For a cherry cologne, it’s also surprisingly masculine, with a slightly prickly herbality in the dry-down that adds a bit of earthiness and grit. Of all the picks on this list, it’s the one with the most traditionally masculine hallmarks, for sure.

As I’ve come to expect from the higher-end Dior cologne, performance is stellar. You can expect between 8 – 10 hours of arm’s-length projection, with room-filling scent for the first couple of hours.

Cherry Punk Room 1015 is like a perfect marriage between Tom Ford’s Lost Cherry and Tuscan Leather.

It’s a great combination, with the deeper leather accords balancing the sweetness of the cherry to produce a fragrance that is neither too sweet nor too heavy.

The leather involved here is soft and dark rather than rugged and dirty. It’s sleek and serene – no scruffy biker energy here.

It serves as a beautiful backdrop for lighter flecks of violet and mimosa to shine brightly.

And just like Lost Cherry and Tuscan Leather, Room 1015 lasts a fair while. For the first 3 – 4 hours you’ll pick up compliments from those who pass you by, and lasts another 4 – 5 as an intimate skin scent for those lucky enough to get close. Yum.

While the opening is bright and juicy, the main distinction between Popped Cherry and the other dupes on this list is a smoky element you can trace throughout the heart and base. Combined with the cherry and soft florals it’s a little reminiscent of incense and worth considering if you find cherry sweetness a little effeminate in isolation.

During this mellowing out, Popped Cherry introduces soft floral and vanilla notes that settle to just the right level of intensity. This is not an overbearing fragrance, and I’d feel comfortable wearing it to the office, for example.

The woodsy notes in the base certainly contribute some depth and make Popped Cherry more reminiscent of a sensible cologne than a flamboyant perfume – which can’t be said for all the picks in this list.

If you’re just looking for a blast of cherries, there are better options out there. But for something a little more subtle, mysterious, and masculine, Popped Cherry is the way to go.

Amarena Cherry is not a like-for-like Tom Ford Lost Cherry dupe, but it is a great example of an intriguing cherry fragrance that will turn heads and collect compliments.

Compared to Lost Cherry, Amarena is a lighter, more sensual fragrance, led in the opening by bright cherries and carried through the heart by evocative Turkish rose and jasmine.

The heavier, boozy quality of the Tom Ford original is notably absent, so this is a great choice for anyone put off by alcoholic undertones.

It’s closer to a tart, sugary syrup than a cherry liquor, mellowed out by a warm base of tonka bean and rich sandalwood.

Once you’ve tried Lost Cherry, there’s a good chance you’ll fall in love and be able to justify splashing out on a full-sized bottle. At least, that’s what happened to me.

For me, Lost Cherry is the best cherry-inspired fragrance I’ve come across. And I’ve been looking.

You may have found cherry colognes to be a little sickly sweet in the past, but it doesn’t have to be that. This is a classy representation that maintains Tom Ford’s reputation for subtlety and sophistication but not at the expense of excitement or intrigue.

The cherry here is juicy and leathery. It’s mature and nuanced, blending with rich, vanilla-tinged almonds in the opening to conjure something that smells inviting and elegant.

The primary accord ebbs and fades throughout the lifetime of the scent. If it started at 100% cherry, it’s probably at 20 toward the end of its 10-hour lifetime. It’s gradually succeeded by progressively potent notes of licorice and cloves, and the gradual reveal of cedar and patchouli in the base.

If You Can’t Afford Lost Cherry, All is Not Lost

So there you have it – if you’re not willing to stump up for Tom Ford’s Lost Cherry, these recommendations should keep you busy.

Your pick will mainly depend on whether you’re looking for a like-for-like dupe, or a little bit of nuance to fully connect with your personality, the world of fragrance truly has something for everyone.

If you enjoyed this guide to the best Tom Ford Lost Cherry dupes, check out some more reviews about the best clones out there: