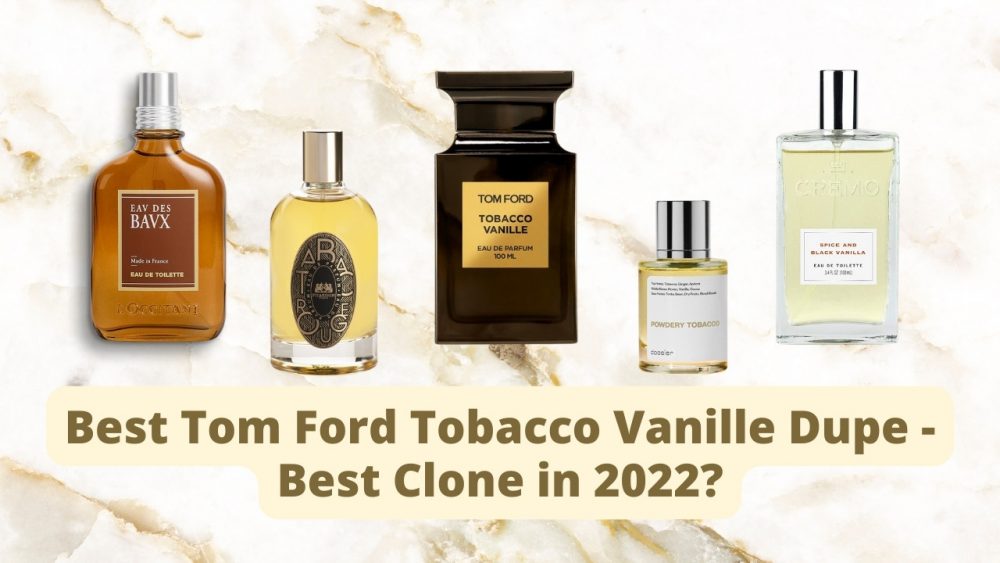 Tobacco Vanille is one of my favorite Tom Ford Colognes, but one thing I’m not exactly enamored with is the price tag.

It’s pretty expensive, and there have been times when I’ve held off on using a particular fragrance because I feel the need to save it for a more special occasion.

About a year ago I decided enough was enough and went on a search for the best Tobacco Vanille dupes on the market – and I’m going to share them with you.

Bright citrus and musky vanilla combine to create a serial compliment-collector.
Perfect as an alternative to Creed Aventus for Gents on a budget.
Available at:
AMAZON HERE

Some of my picks are a like-for-like copycat of Tobacco Vanille, while some overlap more loosely, sharing similar accords but holding their own distinct character.

First, let’s look at a cologne of the most underrated brands out there – Cremo.

This is my favorite Cremo cologne, and I still find it hard to believe it’s so cheap. You just will not get better value at this price point.

I love the hazy tobacco in the heart, livened up by flickers of cardamom spice. It’s balanced beautifully against sweet vanilla, coming together to produce something impressively natural-smelling and elegant.

And just like Tom Ford’s Tobacco Vanille, Spice & Black Vanilla projects extremely well. This stuff just seems to last forever, which is pretty unusual for a budget cologne. Anything more than a couple of sprays is complete overkill.

Plus, all Cremo products are cruelty-free, so you can smell good while doing good.

This is another pick where the price tag will make you do a double take. For the price, RWA is almost unbelievably good.

If you have no money but still want to smell like a million bucks, I say to you: buy this cologne from Zara.

The opening is sugar cane and coconutty sweetness, which lasts for about an hour. After this, the warm creamy vanilla opens up, with touches of rum and cardamom and cloves lending spice and warmth to the heart.

There’s surprising and welcome depth in this fragrance, with layers evolving and changing over time. This is no generic, linear tobacco blast, that’s for sure.

The main difference between Rich, Warm, Addictive and Tobacco Vanille is found in the eponymous note. The tobacco here is more realistic and fruity than in Tom Ford’s cleaned-up blend. It’s a little sharper, and probably best for someone who doesn’t mind a bit of bite.

Now, this is definitely not a Tobacco Vanille clone, but there’s enough overlap that I thought it was worth sharing.

The rich tobacco is still out in force, but the main difference here is the source of the balancing sweetness. There’s no vanilla in Tabac Rouge. Instead, a combination of ginger, cinnamon, and honey provides a warming sweetness that reminds me a little of Christmas.

In terms of value for money, Tabac Rouge does really well. It’s a denser and spicier alternative to Tobacco Vanille with insane longevity and projection. Those deep, rich notes echo out past 8 hours, becoming even more similar to the Tom Ford fragrance as the honey loses potency.

So if you like the sound of Tobacco Vanille with a sweetly spiced twist, it’s definitely worth giving Tabac Rouge a try.

One of the most widely discussed Tobacco Vanille dupes on the market is Eau des Baux. While they don’t smell exactly like one another, they both achieve a similar vibe and chances are if you like one, you’ll enjoy the other.

I’d say that Eau des Baux is more masculine than Tobacco Vanille, too. It’s a touch drier and has a little more emphasis on spice through dashings of cardamom and pink pepper.

While Tobacco Vanille could be considered a unisex scent if worn by the right woman, I think most ladies would find Eau de Baux a little stiff.

The main similarities arise from the use of vanilla and tonka bean lending that powdery, gourmand sense that smells good enough to eat.

In terms of longevity and projection, it’s a little lighter than Tobacco Vanille. It’s not weak by any stretch of the imagination – you’ll still get a full 8-hour day of fragrance – but it’s not in the same league as the famously room-filling Tom Ford colognes.

It’s more of an intimate fragrance for a low-key individual looking to project calm confidence rather than make a head-turning entrance.

Compared to the other picks on this list, Powdery Tobacco is probably the most faithful recreation of Tobacco Vanille. Dossier isn’t shy about producing like-for-like imitations, and this dupe is basically 95% of the way there. It’s really close to the real thing.

Dossier really nails the musky, woodsy aspects that keep this sweet fragrance subtly masculine throughout its lifetime. It’s got this creamy quality, peppered with a little dry spice to keep things from becoming too safe or predictable.

It’s a success in terms of replicating depth and texture that makes Tobacco Vanille feel so sophisticated – the only real difference is that the slight dried fruits aspect of the original is absent.

It’s not particularly noticeable, and to be honest I don’t really mind.

Powdery Tobacco gets the main elements spot on, and nobody ever bought Tobacco Vanille for the subtle hint of dried fruits. The execution of bright, soft tobacco flowers and cozy vanilla is impeccable. I’d rather a dupe that does most things to perfection, than tries to do them all and fails.

So if you’re looking for the closest thing to Tobacco Vanille you can possibly find, Dossier’s Powdery Tobacco is the pick for you.

Velvet Teddy is very similar to Tom Ford’s Tobacco Vanille in the heart and the dry down – it’s only the honey note in the opening that really separates them. It’s a pretty sweet smack around the face for the first half an hour, but it soon settles down into the sleek tobacco and vanilla pairing we’re looking for.

As you might have guessed from the pink bottle, Velvet Teddy is slightly more feminine than Tobacco Vanille. But that said, I was actually pretty surprised by how masculine it is.

It would definitely make sense for a man to wear it, and I even think it puts out a slight “bad boy” vibe. It’s more masculine than most modern-day gourmands out there, at least, so don’t be put off by the packaging.

Given that seductive, alluring quality, I’d be tempted to recommend Velvet Teddy for date night. You can imagine it fluttering across a candlelit table towards you, filling your senses, and sealing the deal.

Once you’ve tried Tobacco Vanille, there’s a good chance you’ll fall in love and be able to justify splashing out on a full-sized bottle. At least, that’s what happened to me.

Tobacco Vanille is a masterclass in minimalism. It lets the two primary accords shine on an uncluttered platform rather than looking to reinvent the wheel.

The vanilla has pleasant sweet notes (but not sickly-sweet) and is a little smokey. The golden tobacco brings out warm and spicy keynotes. It’s a match made in heaven, and I’d class Tobacco Vanille as a perfect perfume.

I acknowledge that this is one of those fragrances that might be more down my particular alley than others. The lack of a deep base accord like leather or a potent wood might leave some yearning for more explicit masculinity. There’s not much there in terms of heat or passion, either.

But for me, it’s enough. It smells rich, a little like a premium cigar lounge. This quiet masculinity is a great choice for a signature scent if you’re the “quietly confident” type. It’s a self-assured fragrance for a gent who doesn’t feel the need to throw his weight around to get respect.

Tobacco Vanille packs a punch. You’ll get 12 hours of meaningful projection, and for the first 4-5, you’re a delectable beacon of fragrance. I tend to go for a single spray after I dress, followed by one post-lunch.

Why is Tom Ford Tobacco Vanille so Expensive?

Tom Ford colognes use some of the finest all-natural ingredients on the planet, which most companies have abandoned due to high costs.

You’re also paying for the years of experience that have gone into producing exceptionally well-balanced fragrances – real expertise costs money. It’s a laborious process, but it’s this sort of attention to detail that produces the best results.

As the saying goes, you get what you pay for!

If you enjoyed this guide to the best Tom Ford Tobacco Vanille dupes, check our other reviews about the best clones out there: