Skip to content
Get 40% off at Famous SMoke SHop: Promo Code AFFSHAVEOFF40 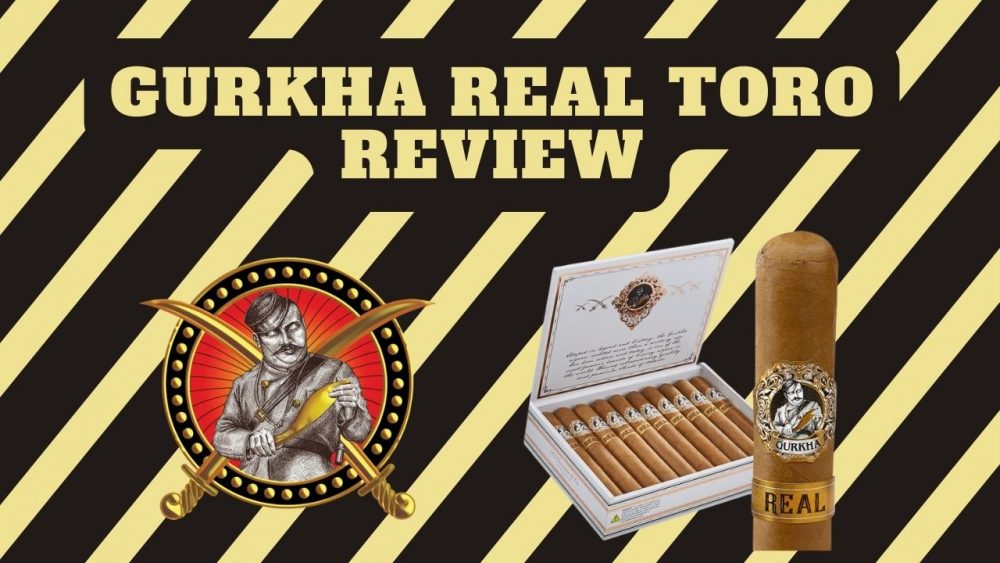 The Gurkha Real Toro is a medium-bodied smoke that’s ideal for someone looking to step up from beginner cigars to something a little more serious.

The Dominican filler is rich and flavorful, encased in an Ecuadorian Connecticut wrapper that burns beautifully.

It gets a little harsh for the last 15 minutes. The tickle at the back of the throat could be a little much for rookies.

Gurkha Real Toro at a Glance

Right off the bat, each stick comes tightly wrapped in cellophane, which is handy for freshness if you’re away from your humidor. Happily, each one has a perforated tag for easy opening, so there’s no risk of damaging your smokes if you’re in a hurry to get them open.

The Ecuadorian Connecticut wrapper is smooth, shiny, and golden brown. The seams are subtle- this is a straight and clean-looking cigar, for sure.

The gold, white and black bands feel serious and premium, with a second band, inscribed with “real” as an authenticity marker.

The nose has a hay-like sweet aroma, almost like fresh bread. There’s a touch of woody earthiness to add a bit of bite, too. It’s a really captivating teaser that makes you want to like the Real Toro up right away

On the dry pop, you can detect light floral notes and black tea. There are hints of softened pepper too (more on those later) like spiced butter. It was time to light her up.

The first inch or so harbors slightly sweet hints of florals, before settling down into a more solid, toasted earthy blend.

It’s on the lighter side of life – like a classic Connecticut should be.

It’s not the most complex palate in the world, but it’s an easy smoking experience that would suit someone looking for something unpretentious and casual.

As you progress you’ll uncover leathery, chalky tones that give a smooth velvety texture. It certainly seemed to get creamier throughout the session.

In the second half of the smoke, I became aware of a touch of black pepper bringing a little prickle. It was a nice gear change that kept my interest, for sure.

By the end of the smoke, the lighter notes were replaced by char, and the pepper became a little overpowering. It was just a tickle at the back of the throat, but probably not ideal for less seasoned (pun entirely intended) smokers.

The draw was just a touch on the looser side, and it took a couple of multi-puffs to get the Toro going. But once that cherry was well lit, I was treated to good smoke production on leisurely draws.

This consistency only faltered after an hour and 15, when I had half an inch or so left. By then, the integrity of the stogie had started to falter, and the draw became a little hollow.

Still, for the vast majority of the 95 minutes ride, the burn was straight and true. It maintained about 2 inches of ash without feeling like a balancing act.

The Gurkha Real is a solid Connecticut, equally enjoyable for newbies looking for something light, and veterans who will appreciate its well-balanced nature.

Sure, it’s not the most complex smoke in the world, but it really doesn’t need to be. This is an easygoing cigar whose only gimmick is that it’s surprisingly affordable for what it is.

It’s something I can imagine having a box of, ready to accompany morning coffees after I’ve had some friends stay the night. It’s something we’d all enjoy in our own way, while still getting to share the same experience.

Gurkha Cigars had humble, haphazard beginnings. Kaizad Hansotis was in his twenties when he acquired the brand for just $149. Suffice to say he’s done pretty well out of that investment.

“I was at a beach in Goa… There was a guy selling cigars out of a little hut, and they were branded Gurkha. I was intrigued.”

Despite the modest pricing, Kaizad believed in his own senses. The quality, he felt, was enough to mix it with the big boys. But to be a success, he’s had to elevate the brand and make the cigars a joy to smoke.

“When I came into the business, I noticed that there was nothing in the super high end. I also noticed that everything looked the same. I wanted something that really stood out.”

Where to Buy Gurkha Cigars

I recommend buying Gurkha Real Toros through Mike’s Cigars. They’ve got the best prices I’ve been able to find online and are pretty much always in stock.

They also offer a pretty generous returns policy, so you can send your Gurkhas back if you try one and decide it’s not for you.

FAQs – What You Should Know About Gurkha Cigars

Is Gurkha a Cuban cigar?

Gurkha’s are NOT Cuban cigars. Cuban cigars are still illegal due to the historical trade embargo.

Gurkha offers brandy-infused cigars in the form of their popular Gurkha Congnac range.

What is the most popular Gurkha cigar?

The most popular Gurkha cigar is the Real Toro – even though it was only released pretty recently (2019).

If you’re looking for quality cigars for reasonable prices, check out some more of our guides: