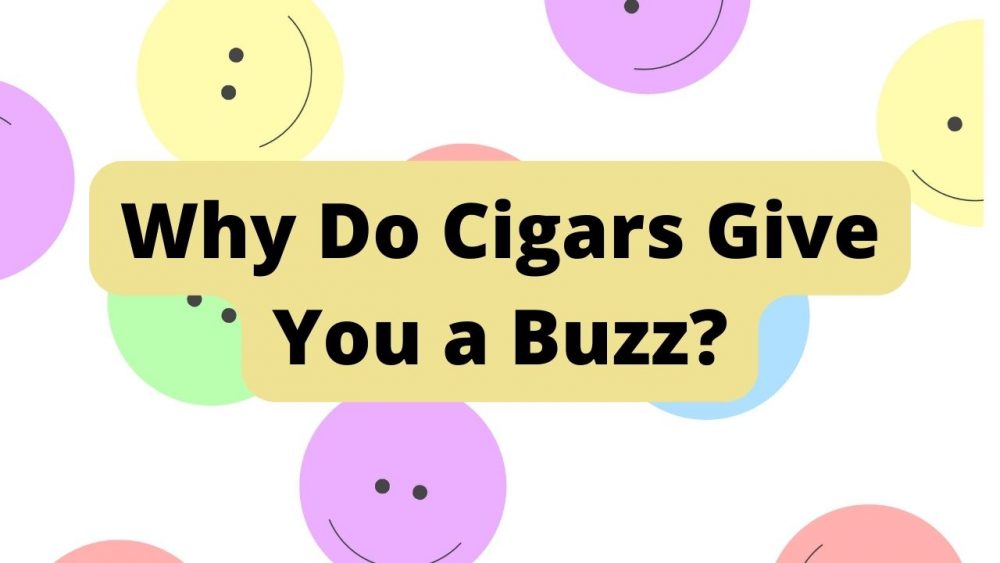 The buzz from cigars comes from the nicotine in the tobacco reaching your bloodstream.

Nicotine is a nootropic that can help you relax and stimulate creativity. This feeling is often referred to as a “nicotine buzz”, and most people find it pretty pleasant. I know I certainly do.

Just make sure you’re not overdoing it.

The cigar can contain around 10 times as much nicotine as a cigarette. Even though you don’t inhale cigar smoke like you would a cigarette, you’ll still be absorbing a fraction through the soft tissue in your mouth.

If you take it too far, it can lead to some pretty adverse effects. Stick with us through this guide to make sure you avoid them.

Why Do Cigars Give You a Buzz – Table of Contents

The main appeal of a good cigar is a rich and smooth flavor – but the effect of the nicotine has a soothing, relaxing quality that many find very pleasant.

It’s a little like how people will enjoy a glass of fine, vintage wine. The quality is in the nuanced flavor, but the chemical effect can add to the overall experience and help you unwind and relax.

A nicotine buzz can give the sense that your senses have become heightened, as though everything has become sharper and more vivid. Nicotine is a nootropic that can aid creativity, focus, and function as a stress buster.

However, just like alcohol, it’s best enjoyed in moderation. If you ingest more nicotine than you can handle, it’s going to be pretty unpleasant. You’ll start to get a general feeling of queasiness, and perhaps start feeling a little dizzy.

If you push it too far, you might feel as though you need to vomit. This is your body’s self-defense mechanism kicking in, trying to remove the foreign element by any means necessary to reduce nicotine levels in your bloodstream.

What Does a Nicotine Buzz Depend On?

Most people can enjoy a cigar without any problems. If you’re experiencing ill effects from too much nicotine, there are several precautions you can take to ensure it never happens again.

How Fast You Smoke

When we smoke cigars quickly, nicotine enters our bloodstream at a rate our bodies are not built to tolerate.

You wouldn’t pound shot after shot of top-shelf whiskey at the bar. In the same way, a premium cigar is meant to be enjoyed slowly.

You should focus on exploring the subtle flavors rather than just getting through the smoke. A gentleman should “sip” his cigar, not “glug” it.

As a benchmark, a drag every minute or so is about right. This is frequent enough to properly enjoy your cigar and keep it lit, without risking crossing the line.

As you some cigars more frequently, your body will develop a higher tolerance for nicotine. Someone who smokes cigars once in a blue moon might struggle with the same smoke his buddy knocks back every weekend, for example.

My advice is to gradually increase your exposure to nicotine, rather than jumping in at the deep end. Start with milder, light blends of tobacco and build yourself up to the heavier stuff.

Tobacco blends will have different nicotine concentrations depending on the crop they were harvested from. Generally speaking, tobacco leaves from higher in the plant will have more nicotine per leaf, due to greater exposure to sunlight throughout their lifetime.

Size of Your Cigar

A long and thick cigar can contain 4 – 5 times as much tobacco as a short and thin one, so cigar size makes a difference in how much nicotine you will consume throughout your sessions.

Of course, you’ll want to pick a cigar that feels comfortable in your hand and mouth so if something slender isn’t doing it for you, don’t be afraid to simply put the cigar out and save the rest for another session. You can snip off the burnt end with a cigar cutter, and store the rest in your humidor for another time. Just don’t leave it too long, as it will not remain fresh for as long as an unused cigar would.

Are You Supposed to Inhale Cigars?

Everyone knows that you’re not supposed to inhale cigars. But if you’re new to cigars, it could be part of the reason you’ve been getting “nic sick”.

Cigars have a far higher nicotine content than cigarettes, and should not be used in the same way.

Your body absorbs far nicotine far more easily through the lungs than it does through soft tissue in the mouth. So when you hold cigar smoke in your mouth, you’re still going to absorb nicotine – but nowhere near as much as if you inhaled it directly.

If I was inhaling my cigars, I’d be feeling dizzy within five minutes too!

How Long Does a Buzz From a Cigar Last?

The effects of nicotine in the body are going to vary from person to person, depending on how quickly they can process the chemical.

It’s a little like drinking. Some people can get over a few shots by the time they get home, other people find the room is still spinning when they hit their bed.

Research from doctor Elsa-Grace Giardina MD suggests that nicotine has a half-life of approximately 2 hours, meaning that after 6 hours, it’s lost almost 90% of its potency.

In my experience nicotine sickness tends to reach manageable levels around half an hour after putting down the cigar, and you’re pretty much back to normal within 2 or 3 hours.

This also depends on the person – this time on the body’s ability to break down chemicals.

How to Avoid Cigar Buzz

If you find that you’re particularly sensitive to nicotine, there are a few things you can do to prepare in the right way.

Firstly, don’t smoke on an empty stomach. Nicotine can cause blood sugar levels to fluctuate, so it’s a good idea to make sure you’re setting out from a good baseline to avoid any light-headed feelings.

It helps that one of the best ways to enjoy a cigar is post-dinner. Just like a shot of espresso, cigars function as a wonderful “digestif” to leave you feeling content and satiated.

Another tip is to keep something sugary to hand, just in case you start to get a creeping feeling. Put the cigar down and have a sip of soda or your favorite candy. I particularly like pausing for a bite of dark chocolate. The flavors of rich cocoa and smokey tobacco form a beautifully decadent partnership.

A cup of tea also works perfectly well for this, but perhaps that’s just my Britishness showing!

Do Cigars Get You High?

A nicotine buzz is not on the same scale as getting high through a joint. You’ll feel relaxed, and chilled out, but you’re not going to get red eyes, start laughing hysterically or walk a mile for some Cheetos.

The confusion could come from the fact that cigarillos like backwoods are used by many as wraps to fashion joints because the tobacco helps the weed to burn evenly.

There is zero THC in a regular cigar, so don’t worry about blowing positive on a drug test after a stogie.

Any chemical craving you might get after a period of smoking a cigar is simply a response to the nicotine.

If you enjoyed this article, check out some of our other cigar guides to help you get the most from your smokes: