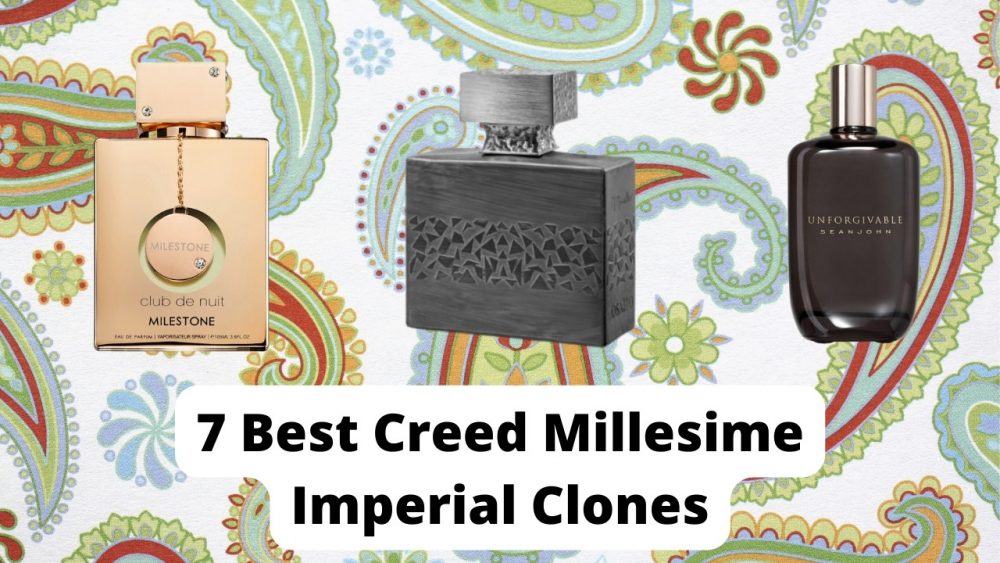 I’m a big fan of Millesime Imperial, but don’t always have the budget to pick it up without thinking. It’s a beautifully fruity, powdery, bergamot-infused daydream – but $300 is still $300.

Over the past few years, I’ve been digging out the best Creed Millesime Imperial clones, and have been able to find some picks that I actually prefer to the original for just a fraction of the cost.

The most faithful clone of the current blend. Will pass a blind test for just $40.
Great longevity compared to the original. Lasts around twice as long.
Available at:
FRAGRANCEX HERE AMAZON HERE
BEST MIllesime-inspired scent

A fun twist on Millesime Imperial that prioritises florals over fruits.
Still mid-range at $100, but far more affordable than the $300 Creed option.
Available at:
FRAGRANCEX HERE AMAZON HERE

One of the few gripes I had with the original Creed cologne is it just doesn’t last particularly long – so most of the dupes on this list have been chosen with improved longevity in mind.

My top pick is Club De Nuit Milestone by Armaf, which to my nose is a 90% clone that lasts almost twice as long as the Creed original. All of that for about 15% of the cost.

I’ve also included a couple of picks that take the Millesime DNA and put a new twist on it – perhaps by prioritizing florals over fruits like Osaito M. Micallef, or the addition of white musk in Citron Del Mar by Alexandria Fragrances.

So, let’s see which dupe is best for you.

Armaf has hit a home run with Milestone. It smells 90% identical to the original Millesime Imperial – and lasts twice as long.

Milestone opens with the same beautiful, salted watermelon accord that made the vintage batches of Millesime Imperial so special. It’s a refined, smooth, and natural-smelling opening that I can’t get enough of.

These opening minutes are a little more metallic in the Armaf than with Creed, but only for 3-4 minutes.

Personally, I’ve got no problems with Armaf taking a leaf out of Creed’s playbook. I’m just happy that there’s someone out there keeping pressure on them to match their prices to the quality provided.

Millesime Imperial has never been the same since Creed updated the formula, but Milestone brings back the scent we all love.

And if Creed doesn’t either upgrade Millesime Imperial or lower the price soon, I’m convinced everybody will turn to Armaf Milestone, sooner or later.

Milestones’ oceanic and marine-inspired dry down is a little airier than the musky base of Millesime Imperial. The ambroxan and woodsy notes linger on for 6-7 hours – certainly longer than 2-3 I’ve come to expect Millesime Imperial, at least.

You get a decent scent bubble for the first few hours two, while the Creed original is notoriously light in terms of projection.

So, twice the firepower for a tenth of the price? Sign me up.

Citron Del Mar opens up with the same salty melon fruitiness as Armaf’s Milestone, reminiscent of the OG Imperial Millesime.

But unlike the Armaf dupe, it maintains the Creed muskiness throughout its powdery dry down, balanced against sensual salty notes that evoke the sea breeze.

I also love the woodsy quality in the base, like a sturdy scaffolding for the brighter citruses to swing around on. This Alexandria fragrance smells noticeably well balanced, with just enough of every element to be a faithful clone.

It doesn’t last quite as long as our top pick, clocking in around 4 – 5 hours of meaningful projection. However, that’s still better than the $300 original, so there’s still plenty of value to be had. If this had 6 – 7 hours of power it would be a no-brainer as a must-have dupe.

Osaito is one of those colognes that “reminds me of” Millesime Imperial, rather than being a like-for-like clone. A beautifully blended twist on the classic seaside aquatic sense.

It’s a great pick for sunny days when you’re looking for an aquatic, salty, woodsy fragrance – but don’t necessarily need all of the fruitness you find in the Creed original.

Compared to Armaf Milestone and Citron Del Mar, Osaito feels a little more unisex. The powdery base of cedar and sandalwood is more neutral than the vetiver in Milestone, for example.

Sure, it has a masculine tilt, but there is greater emphasis placed on floral inflections of marigold, and it feels more exotic than deep.

However, despite not being a direct dupe, Osaito makes up for it in terms of longevity and performance. In my experience, 2 – 3 sprays in the morning will keep you going for 7 – 8 hours. In other words, enough to comfortably cover you for a full day at the office.

Osaito is not the cheapest cologne on this list, but it’s still vastly more affordable than Creed Millesime Imperial itself. I’ve been able to find full-sized bottles for under $100, which is a great deal.

Here’s a pick for anyone where budget is the primary concern. Fragrance oils are the cheapest way to achieve a strong representation of a fragrance without resorting to low-quality imitations.

These essential oils are basically the same as regular colognes, but without the evaporating alcohol that dilutes and releases the fragrance in the air.

As such, it clings a little closer to the skin, but you only have to use a very small amount to achieve the same power.

On average, fragrance oils last me about 4 times as long compared to regular colognes. When you factor in the fact that they also cost far, far less, the value starts to become pretty clear.

In a blind smell test, I think you’d really struggle to tell the difference between Creed Millesime Imperial and the Fragrance Oils’ clone.

The main difference is how you apply it, really. While I would use a spray on my pulse points for maximum projection, I’d apply this roll-on clone to my underarms or lower back. Normally I can smell it pretty well once I’ve worked up a bit of a sweat.

Compared to the bright, fruity freshness of Millesime Imperial, Unforgivable by Sean John is sort of like a more seductive, darker Casanova figure. While still in the family, it’s more of a 3rd cousin than a direct twin.

The opening is a strong blast of citrus that projects really well. It’s sweet mandarin, lemon and grapefruit, with a green freshness that I find even more appealing than the juicy opening in Millesime Imperial.

As that calms down a little, it’s rounded out by flickers of bergamot as we descend into a boozier, woody base. It reminds me of drinking a stiff rum in a sandalwood cabin – it’s incredibly warm, smooth, and homely.

There’s a little bit of nuance in touches of sweet florals like lavender and iris, but they never tilt overtly feminine. Unforgivable is seductive and passionate, but it’s refined and masculine at its core.

Performance is more impressive than most of the colognes on this list, lasting a full 7- 8 hour work day before it becomes a skin scent. For the first 2 – 3 hours, people will be noticing your fragrance from a couple of feet away – and probably saying very nice things.

While Unforgivable is an approachable and versatile scent, the boozy quality in the base makes it best as a night scent, to my nose.

To give you an idea of the quality, Sean John hired David Appel to produce Unforgivable. He’s the guy who worked on a number of Creed imitations with Bond No. 9, so it’s no surprise they’ve been able to pull it off here again.

The problem is that Bond No. 9 colognes are almost as expensive as Creed fragrances themselves – but with Sean John, it’s half the price.

Love and Luck is very similar to Sean John Unforgivable – the main difference is the price tag.

I got a bottle for $10, which feels like it shouldn’t be legal.

This sweet, orange-led scent is perfect for relaxed spring and summer days. The bright opening mirrors the effect in Creed Milliseme Imperial but introduces muted herbal elements of sage, cypress, and cardamom in the heart.

It reminds me of a cross between Milliseme Imperial and Green Irish Tweed, another one of the best Creed colognes.

Sure, it can get a little synthetic at moments, but not in a way you’d notice unless you were looking for it. This will not smell like a cheaper cologne to anyone you meet, that’s for sure.

The base of dark vetiver, oud, and musk is earthy and masculine. I get the sense that if Love and Luck were released by one of the niche high-end designers, people would be shouting about it from the rooftops.

It lasts for up to six hours, too, with a nice little scent bubble for the first 2 – 3. For the price, that’s shockingly good.

Rush of Unicorns is pretty similar to Millesime Imperial, but it’s not quite a clone. It’s about 60% similar to the current batch, sharing more with the sweeter and musky Imperial of yesteryear.

To me, it smells more floral and unisex that the current Creed offering. It has a similar salty fruitiness in the opening but lacks a bit of the vibrancy that makes Millesime Imperial (and Armaf Milestone, for that matter) special.

Despite lacking that sharpness, it still smells classy and confident – it just cares more about the airy, powdery dry down than most other colognes on this list.

The sweetness is still there, but it’s toned down, and the overall scent feels more balanced and airy.

Performance is superior to Millisime Imperial at 4 – 6 hours, which is perfectly satisfactory for what is still ultimately a mid-range summer freshie.

If you’re after an MI clone reminiscent of the older batches, honestly just go for Armaf Milestone. That thing gets you 90-95% of the way there for a fraction of the cost. Rush of Unicorns smells good – but nowhere near $180/100ml good.

Consider Picking up a Decant of the Real Deal From Microperfumes.com

Once you’ve tried Creed Millesime, there’s a good chance you’ll fall in love and be able to justify splashing out on a full-sized bottle. At least, that’s what happened to me.

If you enjoyed this guide to the best Creed Millesime dupes, check our other reviews about the best clones out there:

The Latest in Gentlemanly Conduct

Signup for special offers and expert guides on raising your game in style, grooming - and a few vices for good measure.