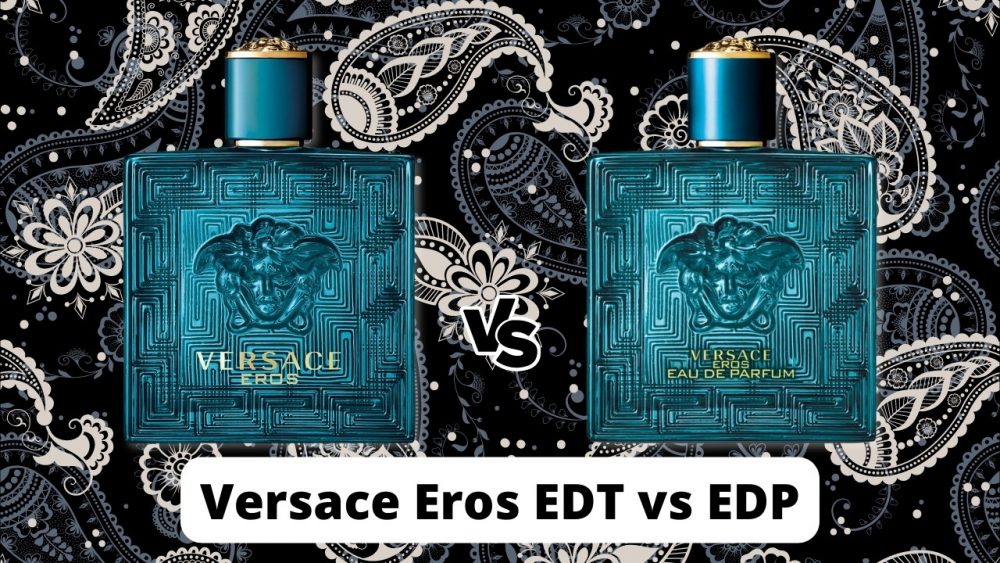 Versace Eros is a masculine club-banger best suited for youthful exuberance. It’s got mass appeal and is pretty much guaranteed to pick up compliments from girls.

If you’re a Gent in your twenties, it’s pretty much mandatory to have a bottle of Eros in your rotation.

This fresh, woody blend marries a masculine base of stiff cedar with fresher inflections of mint and fruits for a fragrance that will drive women wild. It’s for the man-gladiator who is capable of claiming what is rightfully his.

But even within Versace Eros, there’s nuance.

More attention-grabbing than the EDP, and better for a party atmosphere.
Not as expensive as the EDP – about 60 – 70 % of the price.
Check FRAGRANCEX HERE
CHECK AMAZON HERE
Best For: Smooth longevity

Which is best – Versace Eros EDT or EDP?

I’d say they’re about 90% similar, but there are some subtle differences that are important to consider:

The EDP smells more mature and less bright. The sweetness is dialed back, rounded out by deeper notes of woodsy cedar and earthy leather.

The EDP lasts an hour or two longer than the EDT, but the EDT projects more strongly and will grab more attention.

Versace Eros EDT is cheaper than the EDP per ml – but because it doesn’t last as long it works out about the same dollar for dollar.

This apple-vanilla flavor bomb is delicious. It is creamy, rich, and sweet to the perfect level. The vanilla is neatly weighted against tonka bean – and the result is remarkable.

That smooth, sweet sense is punctuated by a sort of pointed spear mint that cuts through. It’s really fresh and vivid, and adds a sense of cleanliness to an otherwise quite gourmand palate.

If it sounds like a bit of a weird combo, just think about your favorite mint choc-chip ice cream without the chocolate. It works really well. The interplay of freshness and dessert flavors is just as addictive as it is unusual.

Girls love it, and I love wearing it.

Versace Eros is pretty loud for an EDT too. In my experience, you’ll get a decent fragrance bubble of a couple of meters for your first 3 hours after application. Beyond that, you’ll have intimate levels of projection for the remainder of the 6-hour ride.

Compared to the EDT, Versace Eros EDP has a bit more of a refined edge and tones down the sweetness.

It smells more mature and balanced, with the brighter apple, vanilla, and mint elements rounded out and superseded by more prominent cedar, orange, and a touch of earthy leather.

Both have really good performance, but I found the EDP to last a couple of hours longer than the EDT. The EDT goes for around 5 or 6 hours, while the EDP will comfortably get you through a full 8-hour workday.

It’s one of these colognes that you still smell on your wrists when you wake up from the night before. When you are spending a decent chunk of change on a designer cologne, you want something that has top-tier staying power.

That said, the EDT does project more obviously for the first few hours, which makes the EDP a better pick for subtler occasions.

If you’re a younger gent looking for something vibrant and energizing, Versace Eros EDT beats out the EDP. The notes feel crisper, louder, and bolder – and more likely to pick up compliments from girls at the bar

On the other hand, if you’re looking for something a little more subtle and serious, go for Versace Eros EDP. It’s got a classier, more mature feel.

It also has a subtler projection that will suit men who don’t need to be the center of attention but still want to smell alluring in intimate moments.

I don’t see why you’d need to run both in your collection because they’re pretty similar.

My recommendation would be to pick up the EDP and use the cash you would have spent on the EDT to explore another classic cologne like Dior Sauvage or Bleu de Chanel.

How Much Does Versace Eros EDT and EDP Cost?

The EDT version of Versace Eros is slightly cheaper, but keep in mind that the EDP lasts longer and has a higher concentration of fragrance oil – so you need fewer sprays to achieve a similar effect.

The cheapest EDT is available in a 100ml format for $75, and is the most accessible way to get into Versace Eros fragrances if you’ve got budget limitations.

Where to Buy Versace Eros EDT and EDP

If you’re looking to buy colognes online, you need to make sure you use a reputable retailer.

More attention-grabbing than the EDP, and better for a party atmosphere.
Not as expensive as the EDP – about 60 – 70 % of the price.
Check FRAGRANCEX HERE
CHECK AMAZON HERE
Best For: Smooth longevity