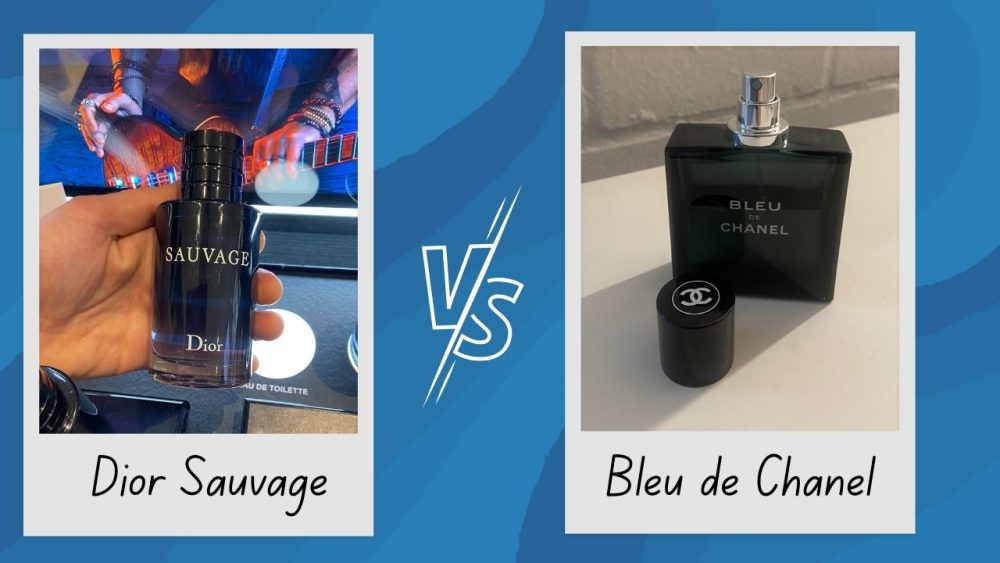 For me, the comparisons between Dior Sauvage and Bleu de Chanel aren’t viable after the first few minutes. The similarity is in the sharp, spicy opening – but beyond that, both colognes start to forge their own path.

Yes, they both have woodsy and musky notes through the dry-down. But the notes around them do a lot to change the overall feel.

Sauvage is heavier on pepper and bergamot, quelled by salty ambroxan and lavender. The base is creamier and denser, closer to the EDP Bleu de Chanel than the EDT.

It’s also a little more brazen with the citric sense, almost bordering on sour – it’s not unpleasant, but worth noting if you’re not a fan of sharpness.

Meanwhile, Bleu de Chanel employs one of the sleekest uses of vetiver I’ve ever come across.

I’ve found that women in my age bracket (late-twenties) don’t tend to go for punchy vetiver colognes. The mature woodsiness tends to be a bit too “old man”.

However in Bleu de Chanel, the vetiver is poised against the spicier, fruity elements and they do a great job of mellowing each other out.

Both Bleu de Chanel and Dior Sauvage have a blue streak, without being fragrances I’d rush to call super aquatic.

If the two fragrances are brothers somehow, it is perhaps in terms of sensibility rather than exact scent. Neither harbors any hidden surprises or miraculous evolutions – these are well-balanced colognes that are more than the sum of their parts. They don’t rely on any single standout note to achieve its impact.

Sauvage and Bleu are both mature and versatile, demonstrating universal appeal without being bland. This is sexiness without trying too hard.

Dior Sauvage would probably be one of the top 3 colognes I’d recommend for any Gent who just wants one fragrance.

Dior colognes in general are pretty mass appeal, which is no great tragedy unless you’re a fragrance snob looking for notes of unicorn horn etc.

Both Sauvage and Bleu are sharp, musky, and spicy if a little unoriginal. But they are supremely crafted and well-balanced. It’s in that nuance that they find their originality.

Like a top-tier rom-com, these colognes don’t bring on earth-shattering revelations – but they will be well received and do very well at the box office.

Critics may call them overused, but we have to remember that our hobby of collecting colognes is still quite niche.

Maybe 2/10 people make a real effort and buy designer colognes, so when we say “this cologne is too popular”, you have to ask yourself “have I actually ever smelt anyone else wearing this?”.

It helps that both colognes scoop up compliments. Even compared to my more expensive niche fragrances (think Creed, Tom Ford), Bleu de Chanel and Dior Sauvage get plenty of positive attention.

I don’t just wear scents to impress others, but if people are consistently complimenting, you know you must smell good.

Dior Sauvage in particular is also a great date fragrance. It just works. I have never got an adverse reaction.

Dior Sauvage has a little more life in it than Bleu de Chanel and is more likely to last a full 8-hour workday. I find that by lunch my Bleu has become more of a personal scent, but Sauvage is still capable of causing people to ask “is it you who smells good?”.

That said, I find that for the first few hours, Bleu de Chanel will get more attention than Dior Sauvage. I wore it to a BBQ last week, and even with the smoke in the air people were asking me what I was wearing as they came close for a handshake or hug.

There’s something about the sandalwood that cuts through the air and feels less “soft” than Sauvage, which feels a little creamy and intimate by comparison.

That was off two sprays to the wrist and two to the neck – in the office I use half as much. It’s indoor, more formal environments I prefer my cologne to have more of a sub-conscious effect, rather than something I have a reputation for.

Depending on how much I use, Bleu de Chanel will last for anywhere between 6 and 9 hours, with the second half more of a skin scent that won’t attract too much attention.

Bleu de Chanel helps me take myself more seriously and get things done, without feeling too corporate and macho.

Dior and Chanel know that most people are deciding between their products, so they’re pretty evenly priced.

As mass appeal fragrances, they’re both affordable enough to become permanent fixtures for any half put together Gent’s bathroom cabinet.

It might be worth noting that there are more denominations of Sauvage on offer than Bleu de Chanel, meaning you’ve got more flexibility to be specific about how much you want to order, and consequently, spend.

Dior also offers a 10oz eco-refill that produces 56% fewer greenhouse emissions per fluid ounce. To be honest, I’d imagine it has more to do with a cost-saving on packaging and shipping than a genuine appetite to help the planet – but still, they pass some of this saving onto you as well. By buying in bulk, your 10z container works out to $21 per ounce, which is certainly better than spending $59 on their 1oz bottle. It’s less than half the price.

I don’t usually stop to comment on the bottles themselves, but these designs are pretty noteworthy.

Bleu de Chanel comes in a deep blue-noir take on the classic No.5 design, but the pièce de résistance is the cap.

It’s magnetized so that it just snaps back into place, so the double C’s always flip around to face the front perfectly. It just feels smart and ready to go.

That might sound like a small thing, but it’s a really satisfying feature that you’ll miss out on if you just order a decant.

The atomizer has a lovely even and consistent distribution. It weirdly gives me Macbook Pro vibes – it’s sturdy and premium, and I’m confident it’s going to get the job down.

The Dior Sauvage bottle is also beautiful. It’s a weighty, solid build that feels expensive, and like Bleu de Chanel it also has a magnetic cover that clicks back into place with intention.

I really think more cologne houses should start doing this. It must not cost much to add a small magnet, and the satisfying snap coupled with the proper alignment of the Dior logo makes you take the whole experience more seriously.

It’s a little like having someone make your bed for you – everything is in its right and proper place, ready for next time.

You Can’t Really Go Wrong with Either Cologne

If you want to understand either fragrance more thoroughly, take a look at my full Bleu de Chanel review – and check back next week for one on Dior Sauvage.

Check out some of our other content for the best ways to get hold of these top-tier colognes: