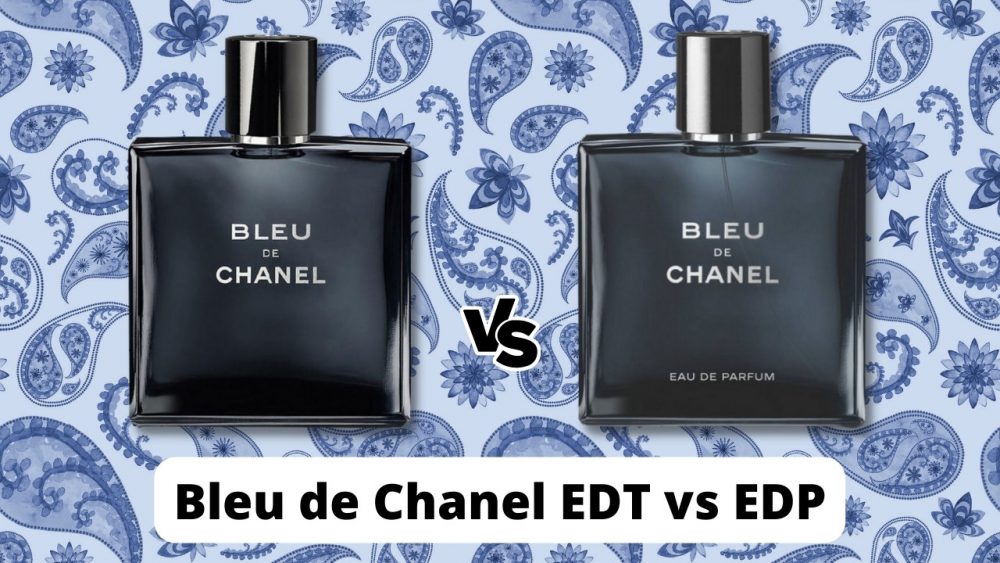 Bleu de Chanel is an intriguing and inviting modern classic.

This well-balanced cologne is distinctive, but not necessarily easy to define. It’s somehow spicy and fresh, yet also warm and musky. It walks a fine line between these two senses – and does so with style.

The different facets of the scent fit together like a puzzle. No one thing stands out and overpowers the rest. Everything just fits together mellowly and with aplomb.

But even within Bleu de Chanel, there’s nuance.

Brighter and fresher than the EDP – better for daily wear.
Cheaper than the EDP by around 15%.
Check FRAGRANCEX HERE
CHECK AMAZON HERE
Best For: Date night

A deeper and creamier plate, with extra musk and incense.
Lasts an hour or two longer than the EDT.
Check FRAGRANCEX HERE CHECK AMAZON HERE

Which is best – Bleu de Chanel EDT vs EDP?

I’d say they’re about 85% similar, but there are some subtle differences that are important to consider:

The EDP is deeper, creamier, and less bright. The grapefruit opening is dialed back, supplanted by an increase in musky and mysterious incense

The EDP lasts an hour or two longer than the EDT, and projects more intensely from the same amount of sprays.

Across the board, Bleu de Chanel EDT is cheaper than the EDP – but because it doesn’t last as long or smell as strong, it works out about the same dollar for dollar.

Bleu de Chanel starts with a refreshing grapefruit note that makes you sit up and take notice. Combined with incense and ginger, the result is an energizing composition that tingles the nostrils.

In the base, Bleu employs one of the sleekest uses of vetiver I’ve ever come across.

I’ve found that women in my age bracket (late twenties) don’t tend to go for punchy vetiver colognes. The mature woodsiness tends to be a bit too “old man”.

In Bleu de Chanel, the vetiver is poised against the spicier, fruity elements and they do a great job of mellowing each other out.

It’s a pretty linear scent that remains consistent throughout its 6 – 7 hour lifetime. What you get at the opening is, for the most part, what you’ll be kicking out hours later.

No prizes for the fragrance snobs that say it smells derivative. That’s because everyone copied it – because it’s a classic.

I don’t just wear scents to impress others, but if people are consistently complimenting me, you know you must smell good.

In the summer of 2014, Chanel released a more intense, parfum version of Bleu de Chanel.

One of my friends has a bottle, so I tried it out to see the difference.  I would say the similarity between the two is around 80%.

The EDP seemed a little denser, creamier, and probably a little more mature.

It feels richer, with a greater emphasis on the deep notes like incense and amber and less brightness coming from the grapefruit.

This cozier EDP probably lends itself better to winter or colder weather – I think it would be a little overwhelming in high heat and feel too thick. The EDT had a more casual, laidback feel to it for sure.

It’s still subtle enough to wear to the office, but just make sure you go easy. It projects more intensely than the EDT, so 1 – 2 sprays will be enough to get you through a full 8-hour working day. Any more than that might come off as a little excessive to your colleagues.

If you’re looking for daily wear, Bleu de Chanel EDT beats out the EDP. The notes feel crisper, and it feels louder, and bolder, and has more of an energizing feel overall.

The EDP is probably a better pick for winter, but If I’m wearing a winter fragrance, I probably want it to go a little further with its warming, spicy qualities. If you’re looking for something special for a chilly evening, you’d do better with a Victor and Rolf Spicebomb, for example.

I don’t see why you’d need to run both in your collection because they’re pretty similar, so my recommendation would be to pick up the EDT and use the cash you would have spent on the EDP to explore another classic cologne like Dior Sauvage.

How Much Does Bleu de Chanel EDT and EDP Cost?

The EDT version of Bleu de Chanel is slightly cheaper, but keep in mind that the EDP lasts longer and has a higher concentration of fragrance oil – so you need fewer sprays to achieve a similar effect.

The cheapest EDT is available in a 1.7 oz format for around $90, and is the most accessible way to get into Bleu de Chanel fragrances if you’ve got budget limitations.

Where to Buy Bleu de Chanel EDT and EDP

If you’re looking to buy Bleu de Chanel online, you need to make sure you use a reputable retailer.

Brighter and fresher than the EDP – better for daily wear.
Cheaper than the EDP by around 15%.
Check FRAGRANCEX HERE
CHECK AMAZON HERE
Best For: Date night

A deeper and creamier plate, with extra musk and incense.
Lasts an hour or two longer than the EDT.
Check FRAGRANCEX HERE CHECK AMAZON HERE