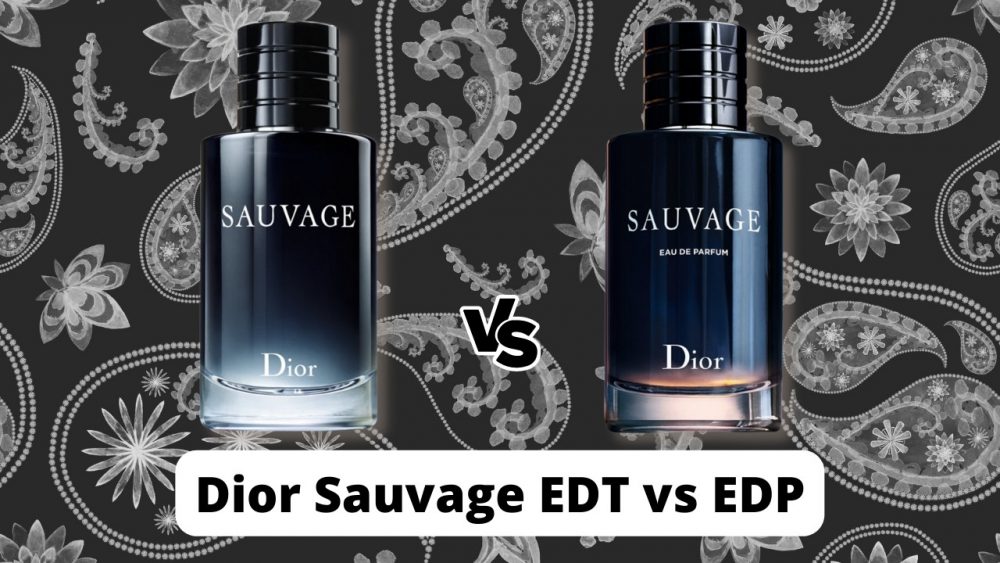 Dior Sauvage is a modern-day classic cologne, and probably the scent I recognize most on Gents I meet in public.

It’s a versatile blend that suits pretty much all seasons and occasions with an impeccable balance between freshness and a touch of deep, woodsy spice.

But even within Dior Sauvage, there’s nuance.

More noticeable than the EDP from a distance.
Slightly cheaper per oz than the EDP version.
Check FRAGRANCEX HERE
CHECK AMAZON HERE
Best For: Smooth longevity

Smoother than the EDT, with a gourmand vanilla finish.
Longer lasting at around 9 – 10 hours.
Check FRAGRANCEX HERE CHECK AMAZON HERE

I’d say they’re about 90% similar, but there are some subtle differences that are important to consider:

The EDP is smoother and less punchy. Pepper is replaced by aromatic Star Anise, with a touch of gourmand vanilla in the base.

The EDT is more noticeable and has greater projection, while the EDP lasts longer on your skin.

Across the board, Dior Sauvage EDT is cheaper than the EDP – but because it doesn’t last as long, it works out about the same.

This masculine scent revolves around key notes of pepper, ambroxan, and bergamot, and opens up with a zing of slightly sour lime. It quickly evolves from a peppery punch into a woody ambery base with a creamy, slightly sweetened sense.

The EDT has great longevity, too. It sticks around for 8 hours, which is plenty to cover you for a full working day. Projection is noticeable at arm’s length range, but this isn’t the sort of fragrance that’s going to overwhelm people when you walk into a room.

Dior Sauvage EDT is a top-tier sophisticated, formal-leaning scent for guys looking to project a sense of confidence and professionalism. It feels mature without becoming uptight or boring – it smells like a good-looking younger guy in a well-tailored suit.

The EDP version of Dior Sauvage feels fuller, deeper, and spicier than the EDT.

For me, the main thing that sets it apart is the Star Anise – it’s a remarkable streak of spice that steps in to replace some of the pepper and ambroxan of the EDT for a more aromatic feel.

In the EDP dry-down, I find a new vanilla undertone that adds a gourmand quality to the fragrance. It’s a nice addition that adds a little class and smoothness when compared to the punchier EDT.

The projection isn’t quite as strong, but Dior Sauvage EDP definitely lasts longer than the EDT. I find that I’ll still smell hints of this parfum on my clothes the next day.

Overall, it’s an easier wear if you’re mainly looking to attract attention in intimate moments, with a level of subtly that I prefer compared to the EDT.

Dior Sauvage EDT is a lighter fragrance that is better suited to warmer settings and summer wear. If you’re looking for something fresh and versatile, this is the route you’d take.

On the other hand, if you’re looking for something a little more subtle and serious, go for Dior Sauvage EDP. It’s less harsh, with a classier, smoother feel – and less mainstream than the EDT version if smelling unique is important to you.

It’s not a ridiculous idea to own both, but if I had to choose one I’d go for the EDP. It takes the original and dials back the punchier elements, adding star anise for a fresh spicy nuance and vanilla in the base for a creamy, musky denouement.

How Much Does Dior Sauvage EDT and EDP Cost?

The EDT version of Dior Sauvage is slightly cheaper, but keep in mind that the EDP lasts longer and has a higher concentration of fragrance oil – so you need fewer sprays to achieve a similar effect.

The EDT is available in a 1.0 oz format for $62, so that’s the most accessible way to get into Dior Sauvage fragrances if you’ve got budget limitations.

To be honest, I’d imagine it has more to do with a cost-saving on packaging and shipping than a genuine appetite to help the planet – but still, they pass some of this saving onto you as well.

By buying in bulk, your 10z container works out to $21 per ounce, which is certainly better than spending $62 on their 1oz bottle. It’s about a third of the price.

Where to Buy Dior Sauvage EDT and EDP

If you’re looking to buy Dior Sauvage online, you need to make sure you use a reputable retailer.

More noticeable than the EDP from a distance.
Slightly cheaper per oz than the EDP version.
Check FRAGRANCEX HERE
CHECK AMAZON HERE
Best For: Smooth longevity

Smoother than the EDT, with a gourmand vanilla finish.
Longer lasting at around 9 – 10 hours.
Check FRAGRANCEX HERE CHECK AMAZON HERE