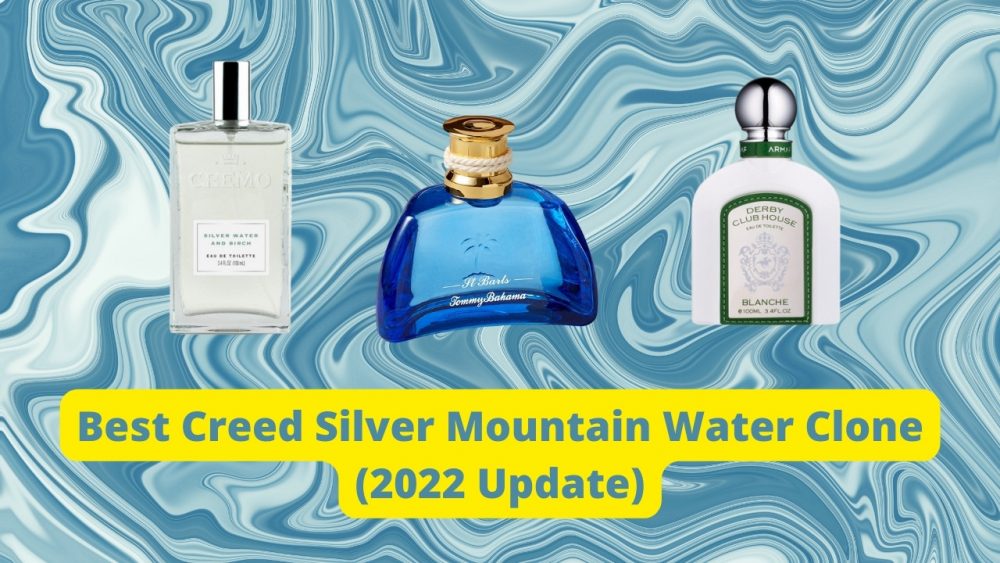 Silver Mountain Water is one of my most complimented fragrances – but it is pretty expensive.

With a zesty twist

A designer cologne in its own right, with incredible balance and quality.
Very similar to Silver Mountain Water, but with a streak of vibrant lemon.
Available at:
AMAZON HERE
Best clone overall

A top-notch imitation at rock-bottom prices.
Al-Rehab Silver has cucumber and citrus notes ideal for staying fresh on a hot day.
Available at:
AMAZON HERE

I’ve picked out a range of colognes that cover all bases. Some are like-for-like clones that are direct imitations, while others are more “inspired by” fragrances that are similar.

If you’re looking for a twist on Silver Mountain Water, check out Bond No. 9 Hamptons lemon twist, or Tommy Bahama’s coconut blend.

If you want to keep it classic, you could just grab a direct imitation from the guys at Fragrance Club. Superb value for an excellent fragrance.

So, let’s get into it

Silver Water and Birch is a fresh and relaxing cologne, ideal for spring or summer strolls through the city. I like to wear it on casual outings to the coffee shop – it smells vibrant, but so effortless at the same time.

It’s the sort of fragrance that will pick up occasional compliments from passersby, but without being overbearing if you’re up close.

The watery notes and oakmoss feel full of life and are pitched perfectly against a more masculine base of woodsy birch. This refined, minimalist representation is perfect for professional environments where you want to project confidence without being too quirky.

If you’re looking to fly under the radar, look elsewhere. This is a serious compliment collector. A true neckbreaker when you walk by.

The opening is fresh and zesty lemon paired with woodsy/floral tones, with the introduction of lime blossom after the first 20 minutes or so. It feels incredibly clean and elegant.

Then, these lighter citrus notes make room for fresh sandalwood and powdery amber in the dry down.

It’s a blend with a noticeably soft projection that entices rather than asserts.

If you’re a fan of lemon accords, Hamptons is your best bet on this list.

However, just be aware that Bond No. 9 is a niche designer house that isn’t actually much cheaper than Creed. So if you’re here for a budget pick, you’ll want to go for something cheaper like our Cremo or Armaf picks.

Al-Rehab Silver is an affordable and clean-smelling fragrance perfect for hot weather. And when I say affordable, I mean like $17 bucks affordable. It smells just like citrus-cucumber water – refreshing and natural with just a hint of green zest.

For me, it’s a perfect dumb-reach daily wear fragrance for hot days. It’s perfectly balanced for the office. If people are up close, they can tell I’m fresh and clean, but there’s no risk of me making an abrupt entrance and filling the room with scent.

After an hour or so, the zest seems to make way for light florals. They’re pretty neutral though – the effect is “bright and summery” rather than effeminate, for sure.

P.S If you’re a fan of Ck One, you’ll probably like Al-Rehab Silver – they smell pretty similar to me.

St. Barts for men is a fun and affordable alternative to Creed Virgin Mountain Water, even if not a like-for-like clone.

The opening is a bright,  punchy blend of lime and liquor. After half an hour or so, coconut milky creaminess enters the scene, alongside a gentle marine saltiness that gives the impression of shoreside living.

Still, for a cologne that’s less than a quarter of the price, there’s absolutely no shame in that.

While St Barts lacks some of the complexity of Virgin Island Water, this is far from a generic citrus cheapie. It punches well above its weight in terms of price.

Longevity is respectable at 5-6 hours. It’s good enough for the working day, but it won’t carry you through to a night on the town.

For anyone reluctant to spend hundreds of dollars on Silver Mountain Water, this might be the cologne for you. I picked up my bottle of Sun Java White for just $20 (!) and haven’t looked back.

This musky, soft citrus fragrance comes with an added streak of blackcurrant. It’s a subud sort of sweetness and the main element that distinguishes it from Silver Mountain Water. Moving into the heart, things get a little more herbal with flickers of rosemary and mint that add a sense of gentlemanly maturity.

To my nose, the base is mainly soft white musk, which is perfectly pleasant – but if you’re looking for the tea notes in Silver Mountain Water, you’ll be waiting a while – ‘cause they ain’t here.

Sun Java White lasts a solid 6 – 8 hours, which is very respectable for a budget cologne. If you can stay smelling fresh all day from a $20 cologne, that’s a win in my book.

Plus, if you appreciate the tea note in Silver Mountain Water, you’re in luck. Armaf Derby Club House Blanche has beautiful green tea accords in the heart which adds a streak of vitality and natural earthiness to the blend. It’s not exactly the same as the black tea in SMW, but it’s certainly within the same ballpark.

Projection is in that perfect arms-length sweet spot. It leaves a nice scent trail as you walk for the first couple of hours, before becoming a skin scent for another 2 – 3 hours.

Just be aware that for some, the citrus notes in the opening can be a little harsh. They calm down after 10 minutes or so, but that initial blast could be considered a little screechy if you over-apply.

Now here is a genuine dupe, if such a term is appropriate. Inspired by Creed have devoted themselves to producing the most life-like Creed imitations possible, and they’re not shy about it.

Their Silver Mountain Water effort is a particularly sincere representation that could probably pass as a cologne 10 times the price.

This refreshing, care-free blend smells almost identical to Silver Mountain Water, apart from an ever so slight synthetic sense if you’re really scrutinizing the palate. There’s maybe a touch more lemon in the opening, too, but not in a way that’s particularly noticeable.

I’d wager that most people, especially those new to colognes, would have a pretty hard time telling the difference between the two fragrances.

Plus, Fragrance Club scents actually last a fair amount of time. Like, 6 or 7 hours. Some original designer colognes can’t even do that, let alone a dupe.

It’s a non-aggressive and clean fragrance that’s best for exuding sophistication in warmer weather. This versatile fragrance is equally at home in the office as it is for relaxing at the coffee shop on the weekend.

It provides a vibrant but sensible base layer of fragrance that will be appreciated by those near you but isn’t going to demand attention whenever you walk.

It doesn’t rely on any overly rough, classically masculine notes, and is probably gender-neutral enough to be worn by both men and women. That said, the musk in the base does become fairly overt in the dry-down, so that’s worth keeping in mind if you struggle with more animalic accords.

This citrusy, musky concoction feels like an early summer evening in the city center. Imagine sharing a crisp gin and tonic with a beautiful businesswoman, discussing quarterly turnover amongst all manner of other things.

On that note, when a woman likes Silver Mountain Creed, they really like it. It’s an intoxicating fragrance that’s bound to receive positive attention.

Once you’ve tried Silver Mountain Water, there’s a good chance you’ll fall in love and be able to justify splashing out on a full-sized bottle. At least, that’s what happened to me.

Hopefully, you found this guide to the best Creed Silver Mountain Water clones useful. Check below to learn about more of the best cologne dupes out there: