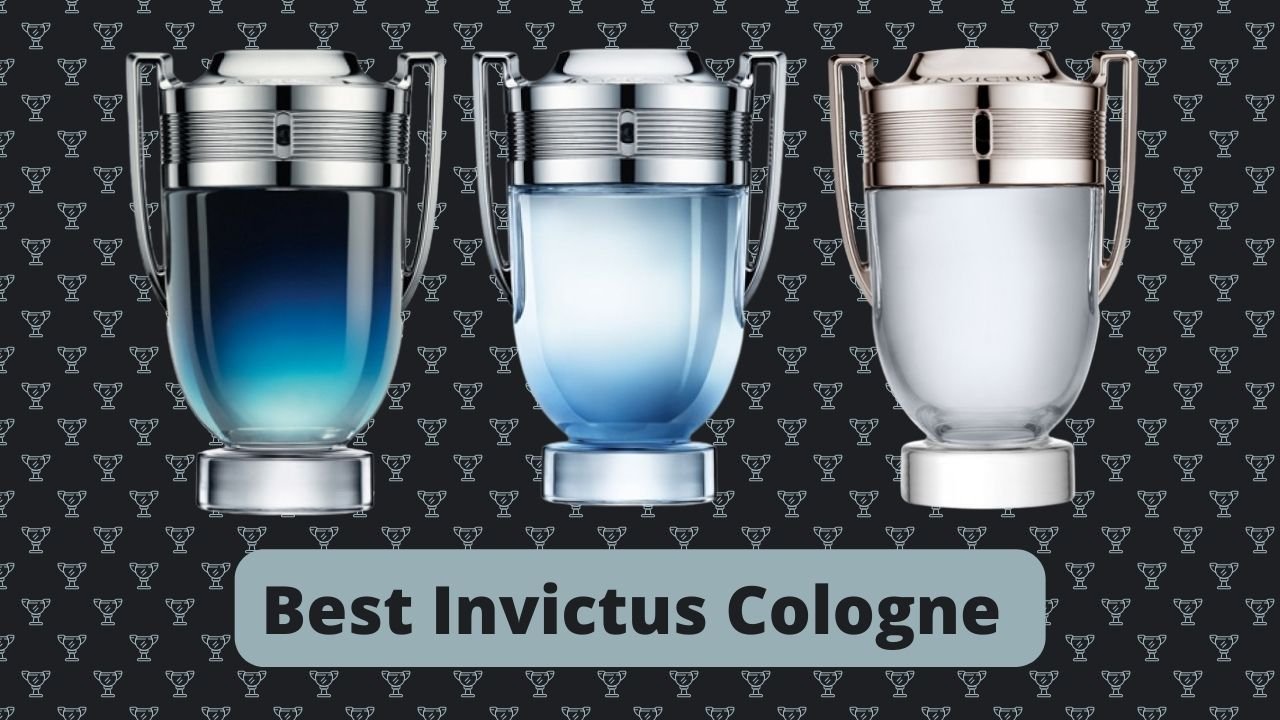 Whether you’re looking for something for office confidence or to impress on a date, the best Invictus colognes will leave you feeling podium-fresh.

If one of the first things you do in the morning is lifting a literal trophy, it’s not a bad start to the day.

Invictus colognes are produced by Paco Rabanne– one of the most established houses on the planet. They’ve cracked the code for producing high-quality, nuanced fragrances that last all day.

If you’re an outgoing young gent in your early to mid-twenties, this might be the cologne for you.

It opens up with a prominent, sweet citrus note which reminds me of Aventus by Creed– but a more subtle and wearable version. Plus, a whole lot more affordable.

Once that citrus sweetness subsides, there’s space for some fresher sea notes to enter the heart. This fresh and clean feel makes me picture clean linens in a fancy hotel.

This is a pristine luxury in abundance, packed full of marine energy with a twist of mandarin orange. There’s a little burned-sugar sweetness underneath it all, like crème brûlée or molten caramel.

This comforting sense helps Invictus to kick back against the sense that citrus fragrances are for summer only; I can picture Invictus working in fall or spring, too.

The 8-hour longevity is a huge plus in an industry where designers are willing to turn in fragrances that vanish within 3- *ahem* Polo Red *ahem*.

Invictus lasts even longer on my clothes- around 12 hours, which is amazing.

A quick word about the bottle shape. It looks pretty, sure. But it’s a bit of a nightmare.

You have to jam the button in the middle to get the atomizer to work properly. If you don’t do it flush, the spray just sort of gurgles out and distributes unevenly.

For me, Aqua is the best Invcivtus cologne out there.

It’s not a masterpiece in the sense of uniqueness or creative brilliance. But that misses the point. Invictus Aqua IS a masterpiece of popular appeal. Paco Rabanne has utterly cracked that nut with this cologne.

It’s like a group of scientists has cracked the code of mass appeal. You can walk into any room wearing Invictus Aqua, and 7 people will love it. Of the remaining three, nobody will outright dislike it. They might just say “it’s fine”.

Compared to the original Invictus cologne, Aqua has some extra zest from citrus notes and a streak of potent violet. It’s brighter and fresher, for sure.

The watery notes and perfect saltiness is like the most refreshing sea mist you can remember.

It takes everything that most people like in an aquatic and expresses them in the best light.

Aqua for me is like the Beatles– talented and inventive enough to intrigue, but doesn’t do anything too different that someone could object to. The perfect formula for mass appeal.

It makes for a satisfying daytime aquatic cologne. On a beach holiday, I’d use this for the sunny speed boating adventure, and switch to the murkier, briny depths of Bvlgari Atlantique for the evening.

While most light fragrances suffer in terms of longevity, Invictus Aqua has real staying power. I easily get 10 hours from this salty, nuanced delight.

Best Invictus Cologne for Appealing to the Ladies- Invictus Intense

Much more intense than the original, woodier, slightly fresh but also warm.

As the name suggests, this is much more intense than the original Invictus. Invictus Intense is a darker, boozier, more brooding cologne.

This isn’t simply a more powerful fragrance, but a play on the allure that the original lacks. There are parallels, but Intense has tilted more towards seduction than the clean confidence of the original.

Imagine you took the original, knocked out the citrus, and added a dash of whiskey. There you have it: Invictus Intense.

But it’s darker than the other Invictus fragrances. It’s the most “different” of the Invictus range, for sure.

For example, there’s a stiff whiskey note that could put a few people off. I think it helps add a hit of maturity and warmth that lends itself to colder weather- but it’s worth knowing if you’re against booziness on principle.

The projection is a little bit quieter, which is quite useful with a stiffer blend. As is the case with all of the Invictus colognes I’ve selected, longevity is excellent.

You’ll last at least 9 hours wearing Invictus Intense. When I showered in the evening after a day wearing it, I could still smell it on my wrist when I woke up the next day.

Best Invictus Cologne for Standing Out From the Crowd- Invictus Victory

Invictus Victory is the biggest departure from the Invictus line- if it wasn’t branded as Invictus, I’d guess it was completely unrelated.

To my nose, it’s like an aquatic cologne mixed with equal parts Vanilla Coca-Cola.

The opening is super lemony, but it switches up to a vanilla and amber combo pretty quickly. This is a gourmand sweetness, but not in a delicate way. It’s like a freshly baked waffle cone- not a work of sophistication, but delicious and moreish all the same.

There’s also warmth from a touch of cinnamon that would lend itself to autumn, and a lavender note that’s equally comforting.

As the black bottle suggests, this is a fragrance for dusky/drizzly environments, not soaking in the sunshine.

Unlike the rest of the Invictus line, Victory isn’t a projection beast. It’s not bad, just average at around 6-7 hours. The projection is also subtler, but I think the scent suits close encounters best anyway.

This is for you if you find the original Invictus a touch too juvenile, and want something that’s a certified winner for nights at the bar.

It’s sort of like how my friend always picks Real Madrid when we play FIFA together. He’s not looking for a challenge or unique experience- he’s looking for the easiest way to win.

Invictus Legend is the Real Madrid of fragrances. It’s a safe bet, you know exactly what you’re getting, and everyone will love it.

For me, the opening of this fragrance is the best part. There’s a grapefruit accord here that is beautifully sweet. I’ve never understood why other fragrances focus on the bitter aspects of the note, rather than letting it shine as sweet citrus.

As it dries down, Invictus Legend shifts into an amber, salty, and aquatic beast of a fragrance. It’s fresh and spiced, combining minty bay leaf with subtle coriander and black pepper.

When it comes to compliment collecting, this is one of the best in my collection.

The mass appeal DNA of the original is maintained, but with some added maturity. It’s the type of fragrance I’ll wear when I’m tired of Dior Sauvage as my daily and am looking for something with a more wearable, aquatic feel.

Projection is improved compared to the original- you’ll kick out scent powerfully for at least 3 hours. Overall longevity is unchanged at 8-9 hours, but that was plenty in the first place.

P.S That delicious opening reminds me of Paco Rabanne’s other major player, One Million.

If you want to get on the Invictus train, you can make it part of your shave routine.

They offer a moisturizing aftershave lotion that draws upon some of the most recognizable Invictus notes grapefruit zest, guaiac wood, amber, and patchouli.

For a moisturiser, it holds considerable close-quarters fragrance even before you’ve applied a cologne. Thankfully, these notes are clean-smelling and neutral so won’t clash with the cologne you apply afterward.

FAQ- What You Need to Know About Invictus Colognes?

How much is Invictus cologne?

Invictus colognes are mid-range and tend to cost between $50 and $100 for a standard-sized bottle.

How long does Invictus cologne last?

Invictus colognes perform exceptionally well. You’ll get a full day’s use of 8-12 hours across any of the fragrances, which is great value for a cologne at this price point.

What is the most popular Invictus cologne?

The original Invictus has been around since 2013, so has plenty of time to establish itself as the most popular fragrance. The flankers are more specialized and have their cult following.

So which Invictus cologne takes the trophy?

Invictus is the most popular range from Paco Rabanne. The flankers offer twists on a winning formula, and your selection is going to depend on what suits your personality best.

For me, the breeziness of Invictus Aqua comes in the first place. It’s now one of my go-to aquatic fragrances, with great crowd-pleasing qualities.

Having said that, if you’re looking for a place to start, go with Invictus Original. It’s the most popular for a reason and the most versatile representation of Invictus. You can then move on to one for the flankers to find something more specific.

The Latest in Gentlemanly Conduct

Signup for special offers and expert guides on raising your game in style, grooming - and a few vices for good measure.